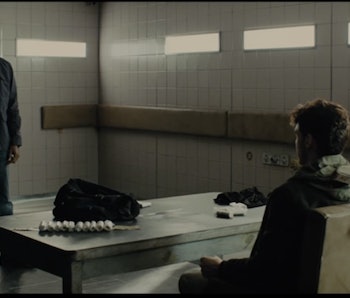 Stringer Bell, aka Luther, aka potentially the next James Bond is chasing Robb Stark across a rooftop in Paris. Then he chases him through a window. And also through a door.

There is a very specific joy in watching a large, fit human being crash through things, as anyone who has watched the phenomenal opening to Casino Royale will tell you. And Idris Elba, he of the gravely voice and barely-contained violent displeasure, is a perfect human being for doing so. He also happens to be a phenomenally gifted dramatic actor with a flare for understated emotions. But judging by the first trailer for Bastille Day, we’re not going to see a huge amount of the latter this April.

Elba stars as Sean Briar, an American (he’s done it before, don’t worry) CIA operative tasked to prevent a major terrorist attack in Paris. Michael Mason, a young pickpocket played by an also inexplicably American (they’re in Paris, wouldn’t it be easier if he was just British?) Richard Madden, is thrown into the mix after stealing a bomb-laden bag from the wrong mark. After the crashy-smashy chase and arrest, the two predictably team up to clear Mason’s name and thwart the real terrorists, who most likely have some inevitable link to Briar’s bosses at the CIA. It all seems pretty formulaic at first glance, but Elba and Madden’s combined talent and chemistry might be enough to carry scenes when they aren’t getting to break stuff and run on rooftops. Watch the first full trailer for Bastille Day, out on April 22, below.