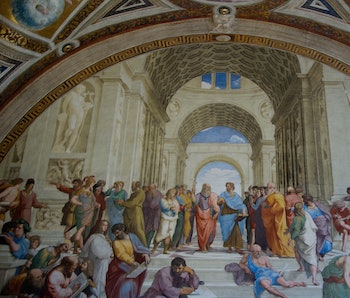 While we have Billy Joel and Richard Branson as today’s star players for Team Atheism, the original pioneer of godlessness in the ancient world was Greek poet Diagoras of Melos, who lived 500 years before the time Christians believed Jesus lived.

Diagoras and his peers — like Euhemerus, Theodorus, and Democritus — make up the central thesis of a book released Tuesday on ancient atheism: In Battling the Gods, University of Cambridge professor Tim Whitmarsh argues that because increasing evidence makes it clear not all people of the antiquity believed in gods, modern man has to shake off the notion that religious belief is humanity’s default setting.

This idea challenges “religious universalism,” a school of thought that says humans are hardwired to believe in gods. Some psychologists believe that religion is natural repercussion of how the brain works — we’re cognitively driven to try to find something that will add order to the chaos of life. While the existence of a “God spot” in the brain has largely been disproved, a handful of neuroscience research still supports the idea that our brains are designed to believe in the supernatural.

While this may be true, Whitmarsh makes the case that it doesn’t mean being religious is natural, and being an atheist is unnatural. His research also disproves a core atheist tenet — rejection of God is a modern reaction to the ancient, primitive world of religion.

“We tend to see atheism as an idea that has only recently emerged in secular Western societies,” says Whitmarsh. Meanwhile “believers talk about atheism as if it’s a pathology of a particularly odd phase of modern Western culture that will pass, but if you ask someone to think hard, clearly people also thought this way in antiquity.”

Whitmarsh asserts that many early societies were actually more welcoming to atheists than the majority of societies today. The was predominantly because of the way that Greek society was set up: Between 650 and 323 BCE, there were about 1,200 separate city states that each had their own customs and ways of treating religion. There was no religious overseer, with the closest unifying sacred text being the epics of Homer. This made for an environment where some would see nonreligious people as inaccurate, but not immoral.

Yes, Socrates was executed in Athens for “not recognizing the gods of the city” — but that was less about having a different religion, and more for trying to shake up the status quo of power concentrated with the elite.

“Ancient atheists struggled with fundamentals that people still question today — such as how to deal with the problem of evil, and how to explain aspects of religion which seem implausible,” writes Whitmarsh.

The acceptance of ancient atheism ended when monotheistic forces like the Byzantine Empire enforced the idea of one God, using ideology as a means of subjugation. Complete control does not pair well with thoughts of disbelief.

These conquerers largely wrote atheists out of history. Whitmarsh’s publisher calls his book the “first book on the origins of the secular values at the heart of the modern state.”

Today, we still live in a predominantly religious society — while Americans have become less religious over time, only about three percent identify as atheists and three percent claim to be agnostic. Polls are tricky because personal identification as an atheist typically deals more with beliefs than traditional definitions, but it’s estimated that about 13 percent of people worldwide don’t believe in the existence of any higher power.

Many of these atheists probably don’t realize that how they feel isn’t a product of an industrial age — but rather is a belief “as old as the hills.”

“[Atheism] asks you to accept things that aren’t intuitively there in your world,” writes Whitmarsh. “The fact that this was happening thousands of years ago suggests that forms of disbelief can exist in all cultures, and probably always have.”