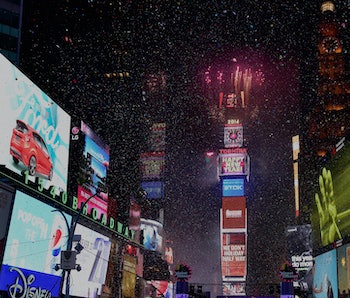 Times Square is overwhelming — too many people, enormous digital advertisements, an excess of colorful stimuli. As part of a new series called the Midnight Moment, all of the sign operators in Times Square will display synchronized footage on the screens every night from 11:57 to midnight, with a different video showing each month. This month, a video of a cat lapping up milk takes over all the screens in Times Square for the three minutes before midnight, which I can imagine adds a tinge of eeriness to the bright atmosphere. In light of the new project, which is the largest coordinated effort in the history of Times Square sign operators, we’ve rounded up a few videos that, for one reason or another, would be fun to see on the big screens.

Music videos used to be inexplicably weird and poorly made when budgets weren’t as large, and this Peter Gabriel video for his 1982 song “Shock the Monkey” is the epitome of a shoddy, hilariously bizarre music videos. It’s a great Gabriel song, but the video becomes increasingly confusing as Gabriel is apparently distraught over piles of unexplained files, then attacked by dwarves. There’s also a strange villainous-looking man with a painted face, and, of course, the fleeting monkey. I have no idea what this song is about, and the video is even weirder, but it would be hilarious to see this imagery take over Times Square for a brief three minutes and bewilder everyone.

Does anyone else miss the Olsen twins? The two have dedicated their professional careers to fashion, following too much time in the spotlight, but you have to give them credit for disappearing like they have. It’s an impressive feat. What do you say we bring ’em back New York-style on the big screens of Times Square? The infamous “Gimme Pizza” song from You’re Invited to Mary-Kate & Ashley’s Sleepover Party ought to do the trick. The overwhelming manic tone of the video, bolstered by a ceaselessly shifting camera and wide-eyed children making gross suggestions for pizza toppings, makes for a one-of-a-kind viewing experience. There’s a popular slowed down version of this video, but I prefer the upbeat, regular mess.

Since Taylor Swift doesn’t receive enough attention, it’s time for her feet — a seriously underrated part of her being — to make their epic, long-awaited debut in Times Square. Aside from the fact that the video for “Our Song” is classic country T-Swift (“my loving bed,” and “’fore I said amen” are two gorgeous lyrics from the song), the first two seconds of this video that show Swift’s painted toes wagging to a diddling fiddle are delightfully weird. Also, it’s a side of Taylor we never get to see, and people are freaked out by feet. Sounds like a winning combination to me.

Times Square is an inherently flamboyant place given all the bright colors, but it’s missing something. That something is a compilation of RuPaul, the beloved drag queen, gently uttering the words “sashay away” to contestants who have been eliminated from the race to be America’s next top drag star. It’s oddly calming to watch her say it over and over again. Maybe after three minutes of it, tourists would internalize the message and add a little bit of attitude to their step as they slowly back away from the huge screens, munching on roasted candied chestnuts.

This one makes it in the list only because the other ones could be fairly traumatizing. Maybe you’re not a tourist, but you’re a New York resident and you’re having an existential crisis and questioning everything about your life, including why you live in a city like New York. You decide to venture to Times Square — the epicenter for all of New York’s evil— to let the loud noises and bright colors inundate you until you gain some clarity. Maybe you’re on a drug, too. Imagine arriving at Times Square to find this tranquil footage of tides rising and falling back into a peaceful ocean. Alas there is some peace, even among the chaos of it all. You shed a single tear and head back to your apartment.