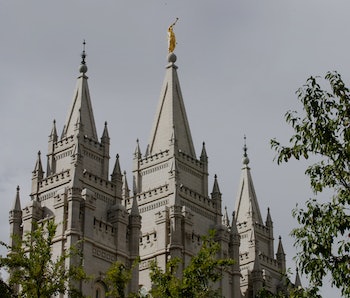 In a move that might make any fan of The Book of Mormon’s head explode, Utah State Senator Mark Madsen is going up against the Mormon Church by supporting a medical marijuana bill. You see, Madsen is a member of the Church of Jesus Christ of Latter-day Saints, but still sees the inherent value in providing medicine to sick people. The Church takes a dimmer view, and issued a statement that legalizing weed could have “unintended consequences.”

The continued backing by the Republican Madsen is definitely a surprise — the Mormon Church doesn’t allow for the consumption of coffee or tea, let alone alcohol or pot — and makes him something of a one-man movement. In more liberal states, there are a myriad of examples of less progressive action. New Jersey Governor Chris Christie, a former presidential candidate, has called for an enforcement on the federal marijuana ban while New York’s Governor Andrew Cuomo has tiptoed tepidly into a medical marijuana law that might be the most restrictive in the country. As we reported, New Hampshire, Michigan, Hawaii, Montana, and Delaware are facing issues with medical cannabis laws, too.

So, here’s this Madsen fella: A magical-underpanted wonder. He’s explicitly giving the middle finger to his church, one of the more unreasonable organizations on Earth. And why? Because he believes his duty to the people is larger than doctrine. “It would be immoral to back down,” Madsen has said, adding of his constituents, “I don’t want to let them down.” He believes that pot is safer than many prescriptions, and has the personal experience to back it up. In 2007, he overdosed on back pain meds and was revived from not breathing. And thank the Mormon God: Mark Madsen is alive to shock us all.