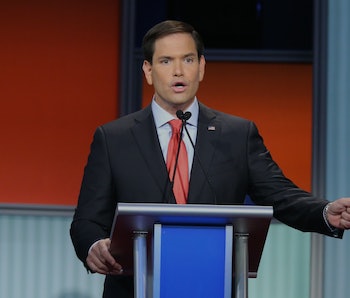 Marco Rubio finished fifth in the New Hampshire primary on Tuesday, but the fall began the previous Saturday, when his system crashed.

You wouldn’t know it by looking at him; his perfect hair, square jaw, and smooth cheeks all stayed unruffled. With Rub1.0, it’s rarely a hardware problem. But when Chris Christie put Rub1.0 through a stress test during a debate, something did not compute.

Earlier in the night, Rub1.0 was running fine. A request came into the server from the friendly Fox Moderators. Rub1.0 responded to the request easily.

But then Christie happened.

“You have not been involved in a consequential decision where you had to be held accountable. You just simply haven’t.” the undeniably human Governor of New Jersey said.

“I like Marco Rubio, and he’s a smart person and a good guy, but he simply does not have the experience to be president of the United States and make these decisions,” Christie finished, mistakenly identifying Rub1.0 as a person, and the carefully-constructed human-politician-approximation system gave up and died. Rub1.0 tried to reboot, but Christie kept calling up requests to the server, and Rub1.0 didn’t have the bandwidth.

On Tuesday as Marco Robot campaigned through New Hampshire, his fellow robots, recognizing one of their own, sought him out for robo-hugs:

Perhaps in denial that Rubio’s actually a robot, his supporters later overpowered his robot supporters:

The signs that Marco Rubio is a robot were right before us all along. Take, for example, back in 2012, when Rub1.0 was caught low on hydraulic fluid during this response to the State of the Union:

Rub1.0 isn’t a particularly well programmed robot at all — even his main “speech” application contains grammatical flaws. He doesn’t know much about science, is unfamiliar with the properties of chemical compounds like THC, and once broke Asimov’s first law of robotics with a football.

He’s given us other hints, like when he said he felt sorry for Darth Vader, who has also been described as more machine than man.

Maybe we were all fooled by his extremely unique and creative tastes in movies, that he shares with other men, because he is just “like all guys.”

Yes, there are still non-believers out there, but for all we know they may be working for the Rub1.0 overlords.

Longtime political journalists are just as confused. They’ve seen Rub1.0’s mechanical behavior day in and day out on the campaign trail, but still remember signs that there may have once been a man where there is now only machine. Perhaps after the latest crash, Mark-0 2Bio will be a better approximation of an actual human candidate. As long as they don’t model him after Ted Cruz.

More like this
Innovation
7.28.2022 11:15 AM
A new robotic twist on the “Turing test” fools human subjects
By Sarah Wells
Gaming
7.28.2022 7:00 PM
The most promising Gundam game in years should be on your radar
By Hayes Madsen
Culture
8.4.2022 11:30 AM
You need to watch the most successful sci-fi thriller on HBO Max ASAP
By David Grossman
Related Tags
Share: