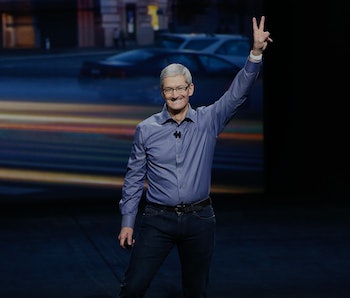 To the thick-fingered, the impatient, the late-night reveler who just wants to watch one episode of Better Call Saul between the bar and sleep, your time has come: Apple TV is finally unveiling a voice dictation function in the beta version of its latest software update, tvOS 9.2 Beta 3.

Anyone who owns an Apple TV is already far too familiar with the broken-limbed tango that is entering each individual character of your username and password using a remote sized for the hands of woodland sprites and the like. It sucks and it takes forever and you’re constantly having to start over again. Now you can just hold down the mic button and speak the entry. On second thought, this might not be as much of a help to the drunks, but that’s a tradeoff you’re choosing.

Check out this demo from Mac Rumors.:

This is a welcome upgrade, but it would be even better if Siri could just hear you shouting out for a replay of that Super Bowl ketchup ad from across the living room. Who’s to say how far the microphone will go in future updates? Still, for now, complaining about something that’s going to make Apple TV a lot easier to use seems damn rude.

More like this
Gaming
9 hours ago
My uncle made Multiversus and he says these characters are being added
By Robin Bea
Innovation
8.1.2022 5:01 PM
The 10 best iPhone wallet cases
By Masha Vapnitchnaia
Mind and Body
8.6.2022 1:00 PM
The 8 Best Apple Watch bands for working out
By Vanessa Spilios
Related Tags
Share: