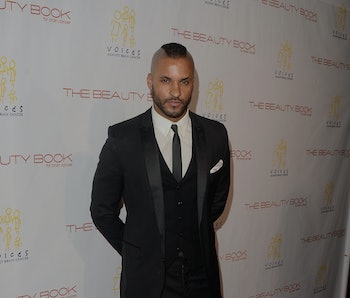 Fans of Neil Gaiman’s wonderfully weird magnum opus American Gods, rejoice: At long last, it’s finally making it to TV. And it’s legit this time, because the show has cast one Ricky Whittle as mysterious protagonist Shadow Moon. We already know it will be cutting-edge creative TV when it airs. It will blend the epic scope of Game of Thrones, the surreal Americana of The Leftovers, the savage beauty of Hannibal, and the zany world-building of Marvel. Yet it will also be entirely its own beast, with Neil Gaiman’s wry wit and Bryan Fuller’s keen eye.

Although not much is presently known about how the show will handle taking episode-sized bites of the novel’s sprawling plot, Gaiman and Fuller’s scattered comments offer enough insight for book readers to sketch out a vague picture of Season 1.

Technical Boy will be the Season 1 big bad

American Gods is novel with a meandering story and a large cast of characters, robust for adaptation. But not every character will be jammed into Season 1. It’s difficult to even pinpoint how many antagonists the book has: Czernobog, Bilquis, Hinzelmann, and even Mr. Wednesday, at times. That’s not even counting antagonists like the New Gods, including the Black Hats, the Intangibles, the Media, and Technical Boy. Neil Gaiman has a lot of ideas, and most of them are in this novel. There’s a lot going on.

The show will be both flashy and nuanced

Fuller has already confirmed that the infamous murder-by-vagina scene will make it onscreen. Such a scene would be easy to sensationalize Ryan Murphy-style, or it could be used to make Bilquis a stereotypical femme fatale.

But Fuller has also expressed interest into looking at her past. This means Bilquis will have actual character development; we won’t know her as only “the sex murder woman.” All of Neil Gaiman’s characters and scenes have meaning. Sometimes, in the book-to-show jump, things can get lost in translation, but this isn’t looking to be one of those times.

Although it’s a cable show, the amount of T&A will be handled well

American Gods contains the most sex of all Neil Gaiman’s books. It’s relevant to the story and hardly gratuitous, but it’s got a decent presence and most of it isn’t vanilla. There’s a death by blowjob-related car accident; there’s sex between a man and a mythical creature; there’s dreamy sex between a man and a cat-person. The news that the show will air on Starz, a cable network, might then alarm some readers: Will these scenes be ramped up for gasps and post-mortem think piece possibilities? Will they become the sum of the show?

But while everyone was off watching HBO, Starz got legit. It’s been ridiculously on-point of late. One of its shows is the most feminist period drama currently airing and another is giving Game of Thrones some legitimate competition. Both Outlander and Black Sails throw in healthy doses of sex and nudity; not much of it is of the “because we can” variety. It’s also shockingly egalitarian; rarely does it feels like one type of naked body is displayed more prominently than another.

Neil Gaiman and Bryan Fuller are not bullshitters, and believe it or not, neither is Starz.

Season 1 of American Gods will premier at an unspecified date that can’t come soon enough.