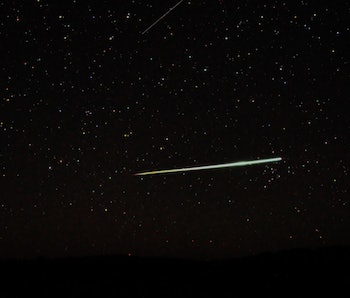 On Saturday, an explosion on a college campus in the south Indian state of Tamil Nadu killed a bus driver who was close by, and injured three others. The blast was big enough to blow out the windows in nearby buildings.

Was it terrorism? A science experiment gone wrong? An infrastructure accident?

None of the above. The prime suspect so far: a meteorite from space.

With no evidence of explosives in play, and no signs of pretty much any other cause, investigators in the state are beginning to believe the blast — which left a pretty big crater in the ground and seems to have been accompanied by some strange blue stone the shape of a diamond — was an object from space, most likely a fragment of a comet or an asteroid.

If that’s true, then the deceased bus driver is the first man on record to be killed by a meteorite crash since 1825, according to a database maintained by the Cometary Science Center at Harvard University. (Ironically, that death happened in India as well.)

Tamil Nadu’s chief minister said in a statement, “A meteorite fell within the college premises,” though a local official cautioned the state needed to complete its investigation and send fragments of the blast out to a lab for analysis, before it could confirm that a meteorite was to blame.

Of course, that didn’t stop us from wondering what might happen if the circumstances favored a more dangerous crash …