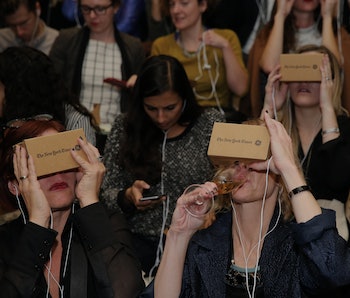 Google’s making the jump from virtual reality’s minor leagues to the majors. Last week, it joined in on another Magic Leap funding frenzy and this week, rumors abound that it’s getting close to releasing its own high-end virtual reality headset. While Google won’t be, uh, recycling Cardboard — the accessible, get-you-hooked-on-VR option — it’ll add a more robust product to its stock. And it’ll do so this year.

On Sunday, Financial Times broke the rumors, chalking them up to “people familiar with [Google’s] plans.” But, outside of these mysterious people who claim to be in the know, there’s additional evidence — when in doubt about a company’s plans, investigate its job board.

In late January, Road to VR did just that, discovering that, indeed, Google’s job listings hinted at plans to offer an alternative to Cardboard.

It sounds like this high-end headset will be a lot like Cardboard, only sturdier. Unlike Oculus headsets, you’ll still need a smartphone. Google’s headsets will therefore be cheaper, since they’ll be dependent on smartphones, but will also, presumably, be a figuratively cheaper experience. (If you’d never go see a 3D movie if IMAX were available, you’re probably an Oculus person.)

The new headset may avoid some of the latency issues plaguing Cardboard. Android users require an additional app to use their phones with Cardboard, and, as a result, experience a lag that often renders them nauseous.

While wearing a Cardboard headset, the virtual world should exactly reflect the user’s head movements. Any lag whatsoever can make the user nauseous or dizzy. (It’s a bit like the spins, insofar as, when you’re drunk enough, your vision sort of lags behind where you look. And this divide between what your body expects to experience and what you actually experience often results in — put lightly — nausea.)

In the next iterations of Google VR headsets, Android devices will come equipped with software and will do away with the extraneous, lag- and nausea-inducing app.

If the past is any indicator, we should be witnessing the realization of this rumor at Google’s I/O developer conference in May.

More like this
Innovation
22 hours ago
Boeing’s Starliner spacecraft takes another shot at the International Space Station
By Claire Cameron
Innovation
5.16.2022 10:30 AM
Bentley Flying Spur Hybrid review: Price, specs, and one annoying thing
By Jordan Golson
Innovation
5.13.2022 11:00 AM
These robots have one special skill that could make human chefs obsolete
By Sascha Brodsky
Related Tags
Share: