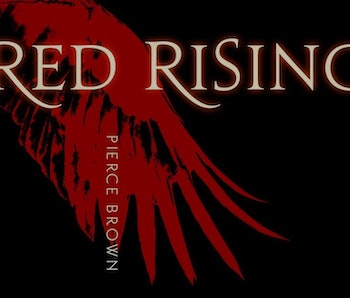 Pierce Brown’s Red Rising was the most compulsively readable debut novel on the market when it was published in 2014. Critics adored it, and it shot up The New York Times Best Seller List within weeks of its publication, primarily because it brought a fresh viewpoint to a tired genre. Morning Star, the third and final installation in the trilogy, will be published this month.

Red Rising follows a teenager who acts like an adult in all situations, which is typical of contemporary sci-fi, but it avoids the love-triangle trap characteristic of the genre. (Notably, Red Rising avoids this by employing the age-old, problematic “women in refrigerator” plot line, but I digress.)

Though the novel, set in a man-made war zone designed for teens to battle out their differences, shares a great deal with The Hunger Games (and therefore Battle Royale), it focuses its sights on the horrors of class inequality and physical labor. While Katniss Everdeen kills in order for her country to find peace, Red Rising’s Darrow is motivated by his society’s corrupt caste system, which placed him and his murdered young wife on the bottom rung from birth.

One would think Red Rising, and the two novels that followed, would have been a timely expression of American angst, as all three books focus on slavery, class inequality and the nature of physical labor vs. white collar strategic work, but Brown’s author bio, which is printed in the back of each of his books, suggests something is awry. Red Rising’s author, it seems, hasn’t fully digested what “work” means to him.

So what does a novel about the strain and torture of physical laborers sound like when it’s written by a young author who thinks he “toiled” at a television studio, “did time as an NBC page,” and was “sleep deprived” while working on a political campaign? Well, it’s disjointed.

Quite often in Red Rising and Golden Son, male characters compare their backgrounds and their prestigious family lineages. Though Darrow, the series’s protagonist, admits to losing his way during these discussions, they do take up more real estate in either novel than more important issues, like the fate of low-color classes who aren’t “Reds”, whose roles in society don’t have the masculine, “respectable” nature of labor or war.

Often, Brown’s “Violet artists” and “Pink” sex workers are depicted as wily, unpredictable, and foolish. They certainly don’t deserve a place at the bargaining table at which Darrow, once a physically capable “Red” and now an even more physically capable “Gold,” finds himself. Class inequality may be an issue that affects all colors, according to the trilogy, but only certain voices are worth listening to.

An interactive graphic on Brown’s author website explains the concept of class as it’s used in the Red Rising trilogy. In Brown’s dystopia, the “Reds” — who work in mines on Mars and are encouraged to compete against each other for resources — comprise the lowest class. Just above the “Reds” are the “Browns” (or low-paid domestic servants), “Obsidians” (or uneducated soldiers who the text calls “monstrous”), and “Pinks” (or courtesans and sex workers). As Darrow, born a “Red” and turned surgically into a “Gold” by a “Violet” (stay with me here), rises through the societal ranks, he meets people of other colors and is unable to afford them much empathy.

He thinks he’s being the better man by considering the lost lives of “Grays” and other low-colors casualties, but he typically regards “Pinks” with either disdain or condescension. Darrow assumes the primary “Pink” character is enamored of him, until she joins the militant resistance in Golden Son and is then considered a threat, having been coerced into violence. The former sex worker’s agency is not discussed. Even the language used in promotional materials and reviews to describe “Pinks” feels off: The Red Rising website says they are “bred and trained for the physical arts of pleasure,” whereas “Reds” are “conditioned to brutal environs.” There’s no attempt to romanticize what the “Reds” do, so why do so many reviews of Brown’s novel call “Pinks” “loving” givers of “pleasure”?

As many critics have pointed out, young adult dystopian fiction has quite a few problems associated with it — the primary ones being representations of ethnicity and protagonists from diverse backgrounds. The Red Rising trilogy is a prime example of another of the genre’s missteps; that is, it tells a story of class struggle and inequality without referencing or giving voice to those who might actually understand the plight of physical laborers. Brown told us in an interview that he researched the experiences of Irish immigrants who worked the fields in 18th century America to inform his novel’s depiction of labor, but perhaps that information wasn’t enough to recreate the entire experience of working as an oppressed laborer.

In a segment from Morning Star published through Entertainment Weekly, Brown’s protagonist says, “I am the Reaper. I know how to suffer.” It’s an arresting statement coming from a character who has lost loved ones and has experienced social exile and loneliness, but considering the other, more hardworking characters in Brown’s pantheon, and what they’ve lost, Darrow’s call-to-arms falls a bit flat.