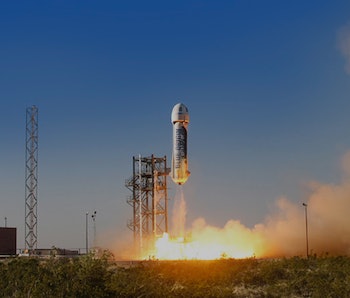 Remember last month when Blue Origin pulled off another successful test flight by launching a rocket into space and safely landing it back on Earth again?

Blue Origin remembers. And they’ve just released a pretty wicked clip of the landing on Vine, from the view of the rocket itself.

As you might recall, on January 22, the spaceflight company owned by Jeff Bezos did a second test of its New Shepard rocket, in which the goal, like the first time, was to send the rocket out into space and vertically land it back on the ground. The aim is to prove the viability of reusable rockets to greatly reduce the costs of space launches.

Making vertical rockets reusable is also SpaceX’s goal — and Bezos ended up beating Musk at his own game back in November. (Of course, it didn’t take SpaceX long to finally follow suit and pull off a vertical landing.)

They first landing is always the hardest. The second landing is easier — but as you’ll see in the video, it’s no less kickass to watch.