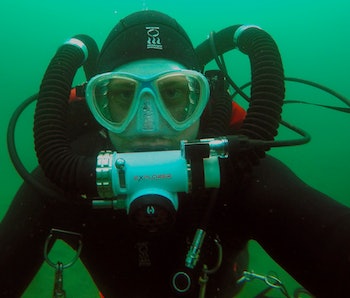 Rebreathers could make an ocean explorer’s ultimate fantasies come true. Recirculating the same air again and again might sound like science fiction, but compared against traditional scuba equipment, rebreathers allow divers to go deeper, stay under longer, and get closer to wildlife. It’s everything a diver would want. So why haven’t they outright replaced scuba gear in the underwater swimming industry?

The same factors that hold back every other emerging technology: they’re still too expensive and too unsteady.

This is in spite of the fact that the technology on which rebreathers are based actually dates back to the 19th century. Today, dozens of manufacturers offer different styles of rebreathers to suit divers’ needs, and the systems keep getting cheaper, safer, and more reliable. There’s no doubt rebreather diving’s popularity is trending upward.

Yet, it’s still a fringe element on the scuba scene. While popular for technical diving, underwater videography, and military applications, rebreathers are still not part of standard training for the vast majority of divers. What gives?

“I don’t think rebreathers are ever going to replace traditional scuba gear,” Rusty Berry, a diving instructor in California, tells Inverse. At least, he adds, not with the level of technology available today. “Remember: there was a guy back in the 1800s who said that nothing would ever go faster than a train. Maybe 20 years from now everyone will go to rebreathers.”

If the technology improves to the point where electronic systems are completely reliable — and the price drops so that it’s competitive with traditional scuba gear — then the switch would be a no-brainer, Berry says.

Given the rate at which the technology has improved in recent years, he might be wise to revise his prediction.

Berry is the CEO and director of education for Scuba Schools of America, and he’s been teaching people how to dive on rebreathers for decades. Rebreathers first became available for sport divers in the 1990s, when Draeger released a popular model.

They worked on a semi-closed circuit: When you exhale, the carbon dioxide would be scrubbed from the air using a chemical reaction with calcium hydroxide. The oxygen lost by your breathing is replaced by a gas mix of nitrogen and oxygen (nitrox) that is bled at a constant rate into the system.

The problem? Too much oxygen is toxic to humans, and too little is deadly. And those early rebreathers didn’t have a sensor to monitor the oxygen content in the recirculating air. “A lot of people died on the early Draegers,” says Berry. “The sad thing with hypoxia, low oxygen — there are no warning symptoms. You just go blink, and you go out. It’s a very quiet, peaceful death.” Later versions included an oxygen monitor, but issues persisted, because if your sensor wasn’t working, you wouldn’t know until it was too late.

Later on came the Inspiration, the first viable closed circuit rebreather for commercial and sport diving. Using an electronic system, it would monitor the oxygen in your air and automatically inject the system with more as required. “The Inspiration was a big hit,” says Berry. “The problem was inconsistency in training. A lot of instructors became rebreather instructors when they had no business teaching people how to be a rebreather diver.

“Unfortunately,” he continues, “a lot of people died with the early Inspirations, which kind of culled the herd regarding instructors because a lot of these guys either got sued and lost their ass, or they just left town and never talked rebreathers again.”

Then in the early 2000s came the KISS rebreather. It did away with unreliable electronic systems, instead relying only on the diver’s ability to monitor their oxygen levels and keep the system supplied at a good level. “You had to be a very astute diver to use these units,” says Berry. “The pros: inexpensive, rugged, worked all the time. The cons: if you’re an idiot, you’re going to die.”

And then Poseidon released the MKVI in 2008, the first closed-circuit rebreather designed specifically to meet the needs of the recreational diver. With its complex electronic systems, diver error is basically taken out of the equation. “The Poseidon has been a godsend for a lot of people who normally wouldn’t be able to get into rebreather,” says Berry. The catch is, the computer goes through 58 system checks each time you turn it on, and if a single one fails, the whole thing shuts down — there’s no workaround. “If we go to Truk Lagoon — people spend $8,000 on a trip — and their super cool rebreather doesn’t work, they’re not pissed off at the manufacturer; they’re pissed off at me. I don’t want to be in a position where we’re relying solely on electronics.”

When the Poseidon works, it works great. It’s as easy to learn and use as traditional scuba, and you don’t scare dolphins, whales, and sea turtles away with your noisy bubbles. Since 2011 there has been a PADI certification for recreational rebreather divers. There are even a few places in the world, including Berry’s school, where you can learn to dive on a Poseidon rebreather without becoming certified in SCUBA first.

If you’re serious about diving, Berry would recommend starting with scuba, and then moving on to rebreathers with a combination of electronic and manual systems, he says. The beginner rebreather course really is best suited for resort divers — people who have a trip planned and want to have a premium experience. “A person goes to Tahiti, and they’re like, ‘Hey, I can dive on a rebreather in 85-degree water and dive for two hours instead of a half hour? Let’s do that.’” If you’re renting equipment from the resort, the electronics issue becomes irrelevant — you’d just trade in for a working system.

Of course, there’s also the question of cost. A new Poseidon is going to start around $7,000, whereas you can get outfitted in scuba gear for $1,500-$3,000. But — what if a rebreather could do what the Poseidon does with 100 percent reliability and compete on price with SCUBA?

It would be game over, says Berry. “They’d be a perfect unit. People would rock and roll, and have fun.”