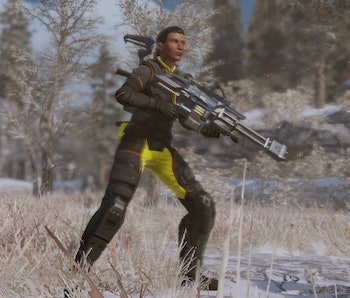 XCOM 2 is great, improving on the original XCOM in almost every conceivable way — something it needed to do, with a bunch of competition on its heels. One of the biggest sets of improvements is primarily cosmetic — character customization. But cosmetic improvements can be crucial, especially given that the 2012’s XCOM’s greatest weakness was a general lack of personality. Even the mere option of character customization was an afterthought — literally, with important things like “different-colored armor” being a pre-order bonus.

This isn’t the case with XCOM 2, which, happily, gives your squaddies all kinds of customization options. Tattoos! Bandanas! British accents! Hairstyles that aren’t short or ponytails, particularly ’fros and dreadlocks! Perhaps most importantly, XCOM 2 offers the ability to give your characters different personalities, so some can be “Happy-Go-Lucky” and others “Intense,” and that affects both how they carry themselves and what they say in combat. It’s a fantastic improvement for those of us who enjoy in-depth themes for our squaddies. Even better, there’s now a spot to import and export characters — so I can use the same ones from game to game, and let other people download them.

So, naturally, I set out to create the X-Men in XCOM 2 (following my work on Game of Thrones characters and the Avengers.)

The reason is pretty simple: I wanted reasons to use the diversity of character creation options that XCOM 2 offers, and I wanted to create something of an emotional connection with my dozens of squaddies. The X-Men, meanwhile, offer a huge number of characters, with significantly more gender and racial diversity than most massive pop culture franchises, thanks largely to the deliberate efforts of Chris Claremont and later X-Men creators to be diverse. It’s still very heavily weighted toward whites and Americans, but at least it’s not 75 percent male like when I tried to make an Avengers squad.

The gender equality of XCOM 2 matches very nicely with that of the X-Men. Rachel Summers, Jubilee, and Dazzler were both some of my most-used squaddies, and some of the best creations I could make.

There are lots of parallels between the X-Men and XCOM 2. XCOM 2 takes place in a near-future dystopia, where oppressors have won, and only the last remnants of decades-old resistance are able to fight against that. One of the most famous X-Men stories, Days of Future Past, presents almost exactly this scenario. Sure, mutants are especially oppressed — but that oppression also shut down effective, creative human society, as well. XCOM 2 does the same, bringing to mind Childhood’s End, in addition to superhero stories.

The huge diversity of art and storytelling in X-Men also means that I can lift whatever works best aesthetically, and still feel good about it. Some of that is simple: I can add an eyepatch to my Wolverine, like his Patch persona had, even if I don’t work with that costume specifically. Or, more generally, I can take the stuff that wouldn’t work on its own, but would work with some massaging, and turn it into a great XCOM 2 character.

Case in point: Hank McCoy, aka Beast. Beast is most famous in his blue humanoid cat form. It’s what Kelsey Grammer played in the third film, after all, and what he’s been drawn as in most comics. But XCOM 2 sadly doesn’t offer full-palette skin color options. (My Nightcrawler is horrible.) So instead, I looked to different forms of Beast, most notably, his time-displaced, young Beast variation from All-New X-Men. He looks like this.

Dorky glasses, earnest face, orange, white, and black color scheme, and hexes? I can do that. XCOM 2 offers a whole range of armor pattern options, and hexes may be the best.

In other words, it may be difficult to adapt a strategy game about humans fighting aliens to mutant superheroes fighting each other and villains, but there are just enough tools in XCOM’s customization, and more than enough variety in the X-Men’s history, to make most characters work. (And this is without the “Anarchy’s Children” DLC that’s supposed to add even more customization.)

But did it work? Did taking however long I took in order to customize all these characters actually enhance my experience? The answer here is unreservedly yes. On one mission, I had to take my squaddies to the other side of the map before time ran out. When it did, I lost two: Storm and Rogue got captured by the aliens. Had it been two random, mid-level soldiers, I might have been mildly annoyed and moved right on. But because it was those particular two — some of the most famous X-Men of all time, lost due to my lack of aggressiveness and tactical competence — I had to decide what I was going to do: reload? Play better in the future? Start a new game?

Regardless, it helped. My experience was anchored to the game itself, the time I spent creating my characters, and my perception of the X-Men, all at once. And it was better for that.