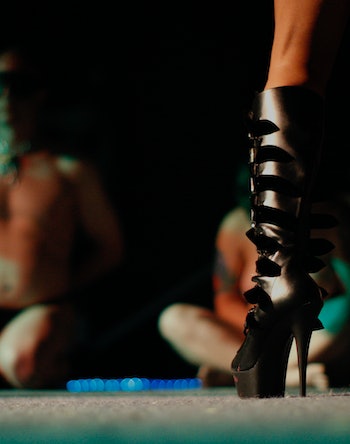 At brunch, as will happen, the conversation turned to fetishes — who had a partner in the past who had one; how was it introduced. A friend wondered aloud why they didn’t have a certain kink — why is it that some of us are more vanilla than others? We tossed around the term fetish brazenly, boozily — when you say the word fetish, people usually get an idea of what you’re talking about. Or, to coin a phrase, you know it when you see it.

Except, in the world of psychology, it’s a lot more complicated than that. The term “fetish” was introduced in the late 1800’s in France, said to describe the situation when a man and a women needed something extra to keep the bedroom potent. The term “paraphilia” came about in 1924 as Austrian psychologist Wilhelm Stekel used it to describe “loving something outside of the norm or love of the perverse.” It’s here where the language, er, kinks. While colloquially people tend to use fetish as a means to describe anything kinky, psychologists have a very specific use for the word: When there is a strong, sexual reaction to an object. If it’s not an object, it’s another facet of paraphilia.

Paraphilia became officially included as an umbrella term in the Diagnostic and Statistical Manual of Mental Disorders in 1980, but sexuality seen as out of the norm had long been a part of the DSM. In its first edition, released in 1952, five forms of “sexual deviation” were listed: homosexuality, transvestism, pedophilia, fetishism, and sexual sadism. These early inclusions were immediate signs of a dangerous effect. There’s a fine line between diagnosing harmful behavior and making a villain out of the nonconforming.

“Some writers have pointed to the potentially dubious nature of paraphilia as a clinical diagnosis,” writes psychology professor Michael Wiederman in his paper “Paraphilia and Fetishism”. “[Some propose] pathologizing atypical sexual interests is merely a method of social control of sexual behavior. . . Accordingly, the diagnosis of an atypical sexual behavior has undergone revision over the 50 years the DSM has existed.”

Therein lies the rub. Some paraphilias, like necrophilia, are legitimately dangerous and deserving of psychological diagnosis. But there are also two huge problems here — the first being that there are a ton of paraphilias and the vast majority of them are harmless. Secondly, the political and personal leanings of the diagnosing psychologists can completely stigmatize a benign sexual experience. Or worse — the label of paraphilia could be what commits an innocent person to a mental health facility.

Psychological professionals have been more mindful to this danger in recent years, and in the most recent and fifth edition of the DSM, sexual masochism, fetishism, transvestism, and sadism are no longer listed as distinctly disorders. But, as Jillian Keenan of Slate points out, there is a list of new “paraphilic disorders” instead: sexual masochism disorder, fetishistic disorder; transvestic disorder.

“To be diagnosed with one of these noncriminal sexual disorders, the person must ‘feel personal distress about their interest,’” writes Keenan. “Simply put, the DSM V will say that happy kinksters don’t have a mental disorder. But unhappy kinksters do.”

A psychiatric diagnostic of paraphilia typically means the behavior has become harmful or obsessive, but psychologists readily admit that many, many paraphilias are minor and few have laws prohibiting them.

“Like allergies, sexual arousal may occur from anything under the sun, including the sun,” writes forensic medicine professor Anil Aggrawal. This paraphilia is actirasty — an arousal from exposure to the sun’s rays.

When it comes to fetishes, the DSM lists the most common fetish items as women’s undergarments and shoes. But academic studies have been conducted including (but not limited to): hairbrushes, roses, eyeglasses, and artificial limbs. As a fetish object, garments are typically divided into two categories: leather/rubber or fluffy/frilly.

In a huge study of 5,000 online users who identified as having a fetish, an international team of psychologists found that the most common fetish was a preference for particular body parts or objects associated with those body parts, followed by preferences for specific behavior from others. It’s important to note that the term “fetish” is used here so, in the words of the researchers, “that we used to locate data on sexual preferences is utilized in everyday language with a much broader scope than its psychiatric definition.”

As to why fetishes occur, no one is certain.

“What causes or leads to paraphilia?” writes Wiederman. “If you can definitively answer that question, your working days are over.”

What Sigmund Freud believed, in typical Freud fashion, is that fetishes came from the first thing a child sees when they realize their mom doesn’t have a penis — the ‘ole “castration complex” in which the fetish is actually a substitute for the missing penis.

Other psychologists have said that, if we’re just talking about people who feel stimulated from specific objects or actions, then it’s highly unlikely that genetic makeup is driving that reaction. However, body-related preferences could be from a genetic predisposition — something in your evolutionary past made you overtly value long toes or thick calves.

Another hypothesis is that people get a sexual preference for a specific element because it’s come to be associated with sex — a particular study found that adult men could be conditioned to associate boots with arousal. Meanwhile, other psychologists believe that a fetish may come from what one saw, and later associates with, their first sexual encounter.

What is certain is, if you’re with a partner you feel comfortable with, if you want to see if you have a fetish, or kink, or paraphilia, the best thing you can do is be honest about it.

“If I could impart some advice to others, I want to say that communication is key,” an anonymous Reddit user replied in an interview with Inverse. “Your partner can’t know what your kinks are if you don’t tell them.

“And even if it weirded my girlfriend out and she didn’t want to participate, I would shrug it off.”