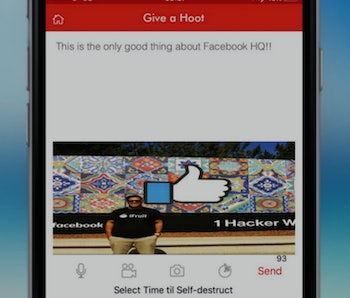 Hooti, a new social networking app that launched this week, destroys everything you put on it.

The app enables you to send forth your 140-character-capped thoughts into the ether — only, each “hoot” is equipped with a self-destruct timer, and it’s up to you how long each hoot sticks around. The app seems to meld the ideas behind Snapchat with those of Twitter. (A less complimentary way of saying that is that Hooti straight-up rips off Twitter and adds one extra Snapchat function.)

The glamorous, marketable mantra claims that it’ll unshackle its users: a citizen participating in, say, a coup d’état, who otherwise would not want to tweet about something he or she had witnessed (for fear of government retaliation down the line) would instead take to Hooti and, uh, hoot; an employee of an overbearing company can be honest about his or her feelings and complain to the void. Which is where the Snapchat ideology comes in: all users can choose how long they want their hoots to stick around for. Or, rather, how quickly they want their hoot to self-destruct.

The self-destruct timeframes are one minute, one day, one week, or one month. Nothing is permanent, in other words — or so they’d like you to believe. If you recognize that, shy of VPNs and PGP keys and the whole nine yards, everything you do online could very well be catalogued, you’ll probably stick with the publicity of Twitter.

The founder, a self-proclaimed Stanford grad named Michael Suppo, is no stranger to creating wishful social networks. He’s the founder of Fruit Inc. Ltd., which is responsible for the following creations, all of which seem, frankly, sophomoric:

Hooti faces a major struggle off the tee: Its user interface and experience is neither original nor enticing. You can reply, like, or re-hoot a hoot. And Hooti takes Twitter’s intuitive, straightforward, and appealing interface and uglifies it.

One “innovation” is that you don’t “follow” people, nor do you have “followers”; instead, you worship people, which in turn appear as fans of you. (Upon registration, I was automatically set to worship @HootiTeam, which felt a bit cultish for my liking.) The implications here seem difficult to overcome, at least on the face of it: users must confront the fact that they don’t just like or wish to follow their favorite celebrities, for instance — they actually worship those celebrities.

In addition to your profile page, you get a home page with four subpages: your main hoot feed, notifications, trending hoots, and top hooters. Again, all of these features very much mimic Twitter.

If you decide to download the app, get accustomed to a twirling pinwheel — it’s buggy.