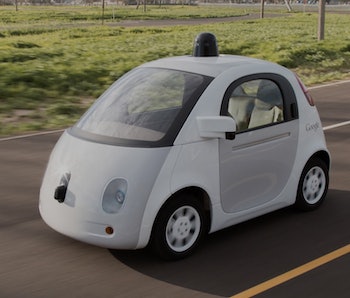 On Monday, Google followed up on the news that it’s the most valued company in the world with a report that its self-driving A.I. travels three million virtual miles every day using its simulator.

And each mile teaches the cars something new. On top of road-testing data, there’s an equally astonishing amount of simulated data — over 3 million miles per day, “the equivalent of circling the equator five times, every hour.” These cars are learning how to behave in a virtual world.

Google’s cars are active in Mountain View, California, and Austin, Texas. There are a total of 55 cars so far, 22 of which are Lexus RX450h SUVs. The other 33 are Google’s prototypes. These 55 cars continue to generate a staggering amount of data: 1.42 million miles so far, averaging 10,000 to 15,000 miles a week.

Every time a driver switches from autonomous mode to manual mode — presumably, because they anticipate a complex driving scenario and don’t exactly trust the car’s coded instincts — Google notices. The computers then replay the exact scenario to discover how the car would’ve acted had it remained autonomous. Engineers study this simulation and proceed to fine-tune the behavior, instructing the cars via code how they could handle the complex scenario more adeptly.

Naturally, all this data requires a huge amount of data storage and computing power. Also naturally, Google is on top of that. From the report: “All of this simulated driving requires huge computing power and luckily we’re able to call upon Google’s data centers for help!”

One benefit of teaching a computer to drive is that it has great memory and recall. With our simulator, we’re able to call upon the millions of miles we’ve already driven and drive those miles again with the updated software. For example, to make left turns at an intersection more comfortable for our passengers, we modified our software to adjust the angle at which our cars would travel. To test this change, we then rerun our entire driving history of 2+ million miles with the new turning pattern to ensure that it doesn’t just make our car better at left turns, but that the changes creates a better driving experience overall.