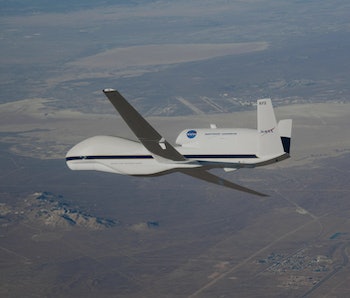 The hacker group AnonSec just released 276 gigabytes of data after some of its members claim to have spent several months inside NASA’s internal network. Among the massive dump of data, which includes personal information for over 2,400 NASA employees and over 2,100 flight logs, there’s this golden nugget: AnonSec says it hacked a $222 million Global Hawk drone and attempted to crash it into the Pacific Ocean.

The group wasn’t bashful about the data dump — taking to its own Facebook page to make it publicly available by way of a self-published “zine”:

Apparently, AnonSec’s main motivation to hack NASA is the agency’s work in climate engineering projects, like cloud seeding and geoengineering. “One of the main purposes of the Operation,” the hackers wrote, “was to bring awareness to the reality of Chemtrails/CloudSeeding/Geoengineering/WeatherModification, whatever you want to call it, they all represent the same thing. NASA even has several missions dedicated to studying Aerosols [sic] and their effects on the environment and weather, so we targeted their systems.”

(Frankly this is a pretty idiotic thing for AnonSec to believe. Humans are nowhere near the point that we are capable of using technology to directly modify the earth’s geoclimatic processes — and those things might actually be worth pursuing! But I digress…)

AnonSec says that in 2013, another hacker sold off an “initial foothold” to NASA’s server to the group. AnonSec members began to creep in and experiment with how many computers they could break into.

The group says NASA’s administrator credentials for keeping its computers and servers secure from hacks were left at “default,” so it only took 0.32 seconds for the hackers to force their way into the network. They say the soon got their hands information about public and private missions, and even video footage.

Left to their own devices, AnonSec says their hackers worked their way into the networks for Glenn Research Center, Goddard Space Flight Center, and Dryden Flight Research Center. They accessed flight logs that just so happened to contain data related to specific, pre-planned flight routes for NASA’s Global Hawk drones. According to the report, the hackers surmised they could simply replace the drone route files with any other flight paths they wanted.

“Several members were in disagreement on this because if it worked, we would be labelled terrorists for possibly crashing a $222.7m US drone,” AnonSec wrote. “[B]ut we continued anyways lol.”

According to the report, on the day this specific Global Hawk took off, NASA’s drone operators noticed the craft was not sticking to its original flight path, and manually intervened to redirect it and bring it back safely.

AnonSec says NASA must have gotten wise to the group’s machinations, because it was completely shut out of the agency’s networks a few hours later.

“Nasa has been breached more times than most people can honestly remember,” AnonSec wrote. “However, this hack into Nasa wasn’t initially focused on drones [sic] data and upper atmosphere chemical samples. In fact the original breach into Nasa systems wasn’t even planned, it was caught up in a gozi virus spread,” AnonSec wrote, referring to notorious Trojan that has infected over a million computers.

“People might find this lack of security surprising but its [sic] pretty standard from our experience. Once you get past the main lines of defense, its [sic] pretty much smooth sailing propagating through a network as long as you can maintain access.”

Update: According to NASA Watch, the agency denies AnonSec’s claims and says it was never hacked and that no drone was ever in danger. So all of this might simply be the result of a hacker group trolling everyone, or NASA trying to quell fears about its network security. We’ll have more for you in the next day or so.

More like this
Science
20 hours ago
Exclusive: NASA Explains How the Voyager Missions Could Live Until 2035
By Kiona Smith
Science
Feb. 1, 2023
65 Years Ago, America Launched Its Most Pivotal Space Mission Ever
By Jon Kelvey
Science
Jan. 29, 2023
NASA-funded study to research if bacteria could help form building materials on Mars
By Matt Williams and Universe Today
LEARN SOMETHING NEW EVERY DAY.
Related Tags
Share: