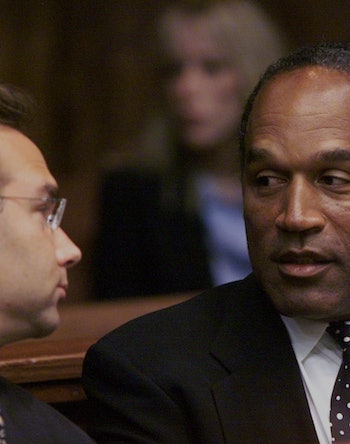 Before Nicole Brown and Ron Goldman’s murders, before Al Cowlings’ infamous white Bronco, before Bruno Magli loafers became a punchline, before “If it does not fit, you must acquit!” became the catchphrase du jour, Orenthal James Simpson was considered nothing shy of a great American. He was a star football player, a crossover success in acting and broadcasting, and a transformative figure, who in his own way was a unifier to a nation still heavily divided by race, class, and war.

Even in a city as big as San Francisco, pre-1994 O.J. Simpson was the hometown boy who made good. His mother, Eunice, single-handedly raised Simpson and his three siblings in a Potrero Hill housing project — humble beginnings, but they made it work. From the minute O.J. touched a football, it was clear he was destined for greatness. First, he won all-city honors at Galileo High School, then won the Heisman at USC — “Not only the finest player I’ve ever coached,” his college coach, John McKay said, “but the finest human being.” When he started breaking records with the NFL’s Buffalo Bills, the New York Times wrote of one exchange: “The thoughtful gesture and the thoughtful words were typical of Orenthal James Simpson, as gracious as he is talented. He is not only one of the most talented players in football history but also one of the most popular.” Five years after his retirement, voters enshrined Simpson in the Pro Football Hall of Fame, at their first chance to do so.

This week begins a 10-episode mini-series on FX, The People v. O.J. Simpson: American Crime Story, that will no doubt raise the ghosts of O.J. the defendant, O.J. the divisive villain of a year of Court TV until his not-guilty verdict. But to truly grasp how important O.J. was, one must grasp the context of the era: O.J. won the Heisman Trophy the same year Martin Luther King Jr. was assassinated. The nation was still recovering from both Dr. King’s assassination, as well as the resulting race riots across the country. Yet here was this charming, charismatic African-American kid from humble Bay Area beginnings accepting college football’s highest honor.

Correctly or incorrectly, O.J. Simpson was almost immediately held up by many as proof that MLK’s dream was on its way to becoming a reality in an era of outspoken, militant black athletes (Tommie Smith, John Carlos, Jim Brown, Kareem Abdul Jabbar). While America had still not forgiven Cassius Clay for changing his name and very publicly refusing to go fight in Vietnam, O.J. was the was the black athlete that white America craved: well-spoken, handsome, humble, disciplined, and most importantly, apolitical. For black culture at the time, O.J. was the prototype for what is known now as new black: black, but not definitively so; African-American, but (often struggling) to be seen as American first.

By Hollywood standards, the man they called “The Juice” never quite made it past B-list celebrity, but pre-trial O.J. was truly a transformational figure in American culture. Much like he was able to crossover from the football field to the big and small screens, he was able to walk a line of crossover appeal to white audiences without being tagged a “sellout.” He could play the role of a Gambian warrior in Alex Haley’s miniseries Roots but was “safe” enough to pitch rental cars, razor blades, and soda pop to Middle America.

I grew up in a family with an even deeper reverence for pre-1994 O.J., for my mother had gone to neighboring Lincoln High School, one of Galileo High’s football rivals. She loved telling the story: “I don’t recall ever caring much about sports at school until we heard about that Simpson boy. He sure did run around the football field like greased lightning.” She’d cackle: “But we liked him a lot better when he took off his helmet.” One of her close friends approached the future star after a game, and the two ended up going steady for awhile.

My grandmother’s connection to the family was closer still. She and Eunice Simpson began a friendship when the two met at church in the late 1980s. Both were devout church members and almost immediately found common ground: Both had migrated to the Bay Area from the South — my grandmother from Texas, Eunice Simpson from Louisiana. Both had managed to balance careers and raising their children after the men they married walked out.

Though my family was certainly a bit more on the radical side politically, O.J. Simpson was their homeboy in the most literal sense of the word. He was their guy. The kid that had walked a mile with them in his own shoes, and then gone on to unimaginable fame and success, especially for a poor black kid from Potrero Hill. Even after all the money and the fame, he never forgot where he was from; he remained active in the Bay Area and was an especially generous benefactor to his mother’s church. My grandmother would call my mom Sunday night each time O.J. made an appearance at service earlier that morning: “Child, he’s just as handsome as the day he chased Kunta Kinte through that field!”

In mid-June of 1994, my family had gone down to stay a few weeks with my grandmother for a mini-family reunion. It was me, my father, mother, and brother, my grandmother, her brother, and a few of their cousins who were visiting from Beaumont, Texas. There was an argument the night of the 17th, on whether we’d all go out to eat, or stay in and watch basketball. Of course, being from Beaumont, the out-of-town cousins protested the loudest, and we settled in to watch the Houston Rockets (hopefully) take it the New York Knicks in Game 5 of the NBA finals.

Even before Bob Costas famously called both the game and the car chase on split screen, the local San Francisco NBC affiliate cut away from the game to air live footage of a white Ford Bronco crawling down the 91 freeway, trailed by what looked to be the entire California Highway Patrol.

“Who is this clown in the white truck and where the hell is the basketball!?”

In my grandmother’s living room, the Beaumont coalition went apoplectic.

“Is San Francisco a suburb of L.A. now, Gloria? This crazy L.A. bullshit taking over the entire West Coast!”

“You know if this was Texas, they woulda been had put a slug through the engine block and we’d be watching Hakeem beatin’ the brakes off Patrick right now!”

“Knowing L.A. all this mess is probably over this fool in the truck being two days late with his library books!”

“They’re going slow enough, Johnny Law should just hop out the car, walk up to the window, and punch this asshole’s lights out!”

For the first few minutes, the old-timer’s bellyaching was at least as entertaining as the game had been. But then once we finally heard the newscaster utter the names O.J. Simpson and Al Cowlings and the phrase “murder suspect,” the room went quiet.

In tears, my grandmother rushed into her bedroom and spent the next hour trying to get a hold of Eunice Simpson, the pastor of their church, and just about anyone else she could think of. Our entire family watched in stunned silence for the next three hours as the Bronco plodded toward Brentwood. A couple of hours after O.J. finally surrendered, it seemed like half of the congregation, pastor included, were now seated in my grandmother’s living room.

Looking back, the talk in the living room that night sounded not too different than the talk that would come to dominate the national discourse during the lead up to, and the eventual Simpson trial itself. Plenty of armchair legal advice, presumption of guilt or innocence (though mostly innocence), and the beginnings of arguments along the lines of race and class that started to divide the congregation like it would eventually divide the country.

Orenthal James Simpson, the Hall of Fame football player, actor, pride of Potrero Hill, and one of the most universally beloved people on the planet had just been dragged off in handcuffs, for the murder of two people. For most of the nation, it was surreal, but in that living room, with those folks, where O.J. Simpson’s most important title was “Eunice Simpson’s boy,” the events of the day hit hard. Certainly the majority of the crowd refused to believe that their O.J. could be capable of such a monstrous act, but even in that crowd, you could tell disbelief was starting to turn into a sense of disappointment, that maybe the Juice wasn’t quite the man they wanted so desperately to believe he was.

Half the room opined that while it was tragic, as a celebrity, O.J. had transcended any racial bias: “It’ll be tough on Sister Eunice, but O.J. is rich and famous, he’ll be fine. Guilty or not, the only color this country cares about now is green. Better he be wrongly charged than one of us!” The more cynical among us, just two years after the Rodney King verdict, saw this as just the latest example of systematic racism: “O.J. is the most respectable Negro to walk this Earth since they killed Dr. King! After all he’s done for race relations in this country, they drag him off in handcuffs the same as they would a common drug dealer!”

More than 20 years later, I’ll never forget watching the pastor alternating between listening to his flock debate, and urging calm. At the pulpit, he had such a full, booming voice he often joked mid-sermon that the church let him stay because they didn’t want to have to buy microphones and speakers for his replacement. Yet as he wrapped up the impromptu meeting, he spoke his words so softly, we all had to lean in to hear him. After a final prayer, he took off his glasses, smiled a weary yet confident smile, and said: “This is a terrible time for Sister Eunice and we all need to hold her up however we can. But like I told her before I got here, don’t worry too much. Brother O.J. will be exonerated, and in a year’s time, no one will remember that this horrible business ever happened.”