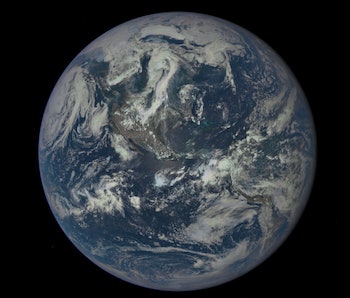 The first node of the European Space Agency’s new laser-based satellite relay system is launching into orbit Friday. The data relay system will allow scientists and businesses to keep in near-constant communication with their research satellites, dramatically increasing the speed of data transmission between space-based satellites and Earth.

“It’s a kind of broadband network in space offering capabilities to transmit a large amount of data from Earth observation satellites down to Earth,” said Magali Vaissiere, director of the European Space Agency’s telecommunications and integration applications division.

The European Data Relay System (EDRS) will ultimately consist of two satellites orbiting Earth 22,300 miles above the equator. Since most research satellites orbit at a few hundred miles, EDRS will be able to receive data from a large number of satellites and then pass that information to Earth. The first node that launched today, called EDRS-A, will begin transmitting scientific and commercial data within the year.

It will transmit up to 50 terabytes of information between satellites in orbit and users on the ground every day.

EDRS has a much wider view of the Earth, so it can keep in touch with a single point on Earth more constantly. It will also maintain a geostationary orbit, keeping pace with the rotation of the Earth, so it will never end up on the other side of the planet as its point of contact.

European governments expect EDRS to be crucial in times of disaster, allowing for continuous data transfer with its eyes in the sky. The technology will complement the Sentinel mission, rapidly developing its ability to monitor the world’s land masses, vegetation, oceans, atmosphere, and ice coverage.

The European Space Agency developed the new data relay system along with AirBus, which will take responsibility for selling access to the data stream commercially.

The real game-changer though might be the commercial possibilities. Countless companies now benefit from low-earth satellites, because the relative proximity to earth makes imaging easier and clearer. For these technologies, EDRS really is like moving to broadband from dial-up. No more waiting to make sure every piece is just where it needs to be. EDRS will be constantly available to relay the data down to Earth — for a fee, of course.

“We believe this will generate a wealth of new applications. This will allow the creation of a large number of companies exploiting this real-time data coming from Earth Observation satellites and, later on, coming from remotely piloted aircraft systems,” said Vaissiere.

The United States has developed and tested a technology similar to EDRS but has no plans to put into as widespread use as the Europeans. The project cost just over $500 million, which may seem like a lot, but just think: How much would you pay never to hear this sound again?

More like this
Innovation
8.4.2022 11:30 AM
Look: 9 stunning images reveal a retired satellite's dynamic views of Earth
By Jennifer Walter
Innovation
8.11.2022 11:00 AM
“Quantum materials” could give the human brain a run for its money, scientists say
By Nathaniel Scharping
Innovation
8.13.2022 9:00 PM
Want to buy an EV? Here’s what you need to know about the Inflation Reduction Act
By James Morton Turner and The Conversation
Related Tags
Share: