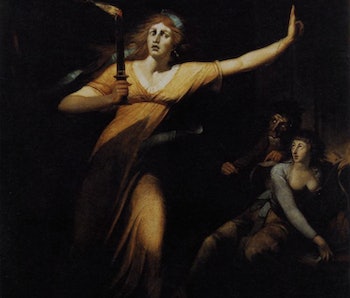 You ever get hauled in for a crime, you better hope you can claim a sleepwalking defense. Last year, for one, a man in North Carolina was acquitted of the murder of his 4-year-old son, claiming he did it in his sleep, thereby continuing a tradition that reaches back more than 150 years. Today, somnambulism is both teasingly familiar and painfully alien —- it’s thought to happen so infrequently that there hasn’t been a serious attempt to cure it.

But is sleepwalking really that uncommon? In a 2012 study in the journal Neurology involving almost 20,000 Americans, close to 30 percent reported sleepwalking or, as the authors called it, “nocturnal wandering,” at some point in their lives. That’s a lot of people — around 8.4 million a year — floating through the night like toe-stubbing ghosts, mostly using the bathroom, doing chores, and eating. Although the American Sleep Association calls it “often harmless,” the organization can’t deny that sleepwalking, occasionally, gets real weird:

“Some sleepwalkers may perform odd actions that they would not normally do while awake, such as climb out of windows, run around shouting, urinate in odd places and rearrange furniture. Very rare cases have seen sleepwalkers drive cars, have sexual intercourse with strangers and even commit murder, for which the sleepwalker in question was acquitted of the charges due to his state.”

Despite the Neurology findings, most sleep specialists maintain that these potentially bloodthirsty zombies and sexsomniacs are few and far between. The majority of sleepwalkers are mostly harmless kids between the ages of 3 and 7 (unless you’re a pair of unfortunate 40-year-old Step Brothers). Sleep disorder clinics suggest parents simply remove sharp objects, lock windows and doors, and hope they’ll grow out of it. They usually do.

The rare few who don’t are typically subjected to a series of treatments, which can involve taking tranquilizers and improving “sleep hygiene” by avoiding stimulants, maintaining a bedtime routine, and getting enough natural light. For more extreme cases, there’s biofeedback therapy — learning to hack unconscious physiological processes, in this case brain waves — and hypnosis. These can help, but they’re not guaranteed.

No one treatment is guaranteed to work when you’re dealing with behavioral disorders, the umbrella term covering sleepwalking together with waking illnesses like depression and bipolar disorder. Unlike diseases, these can’t be cured anyway — only managed. Because diseases have an identifiable source, usually an infection or a faulty gene, researchers can develop treatments with specific targets. The origins of sleepwalking, as far as we know, are pretty diffuse: Stress probably plays a role, as does sleep apnea, anxiety, depression, and genetics. If curbing somnambulation is the goal, controlling for these factors is the best we can do.

Of course, when you’re eye-to-glassy-eye with a sleepwalker, you do have one more option: Just wake them up (seriously, it’s safe). You’ll be doing them a favor.

More like this
Science
7.24.2022 1:00 AM
Too hot to sleep? Why your nights are only going to get so much worse
By Stephen Burt and The Conversation
Mind and Body
7.29.2022 10:45 AM
Why this pervasive immune chemical may be behind pain in IBS
By Miriam Fauzia
Mind and Body
7.28.2022 9:19 PM
A deadly disease-causing bacteria was detected in US soil samples — here's what you need to know
By Katie MacBride
Related Tags
Share: