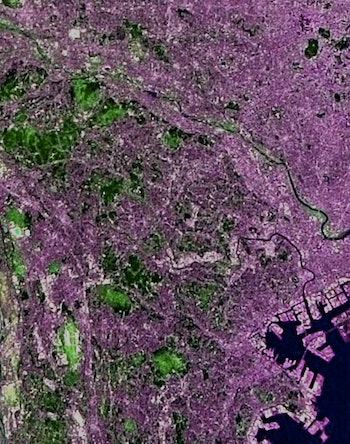 Women come from all over Tokyo to the rundown tower a few blocks from the famous Shibuya Crossing. They take the elevator to the fifth floor, where they are greeted by a committee of handsome, young white guys dressed in butlers’ outfits. “Welcome to the Butler Cafe, princess,” the white guys say in unison through taut smiles.

Maid cafes first hit the streets of Tokyo back in the early 2000s. With bright pink hair and garish cosplay outfits, Japanese waitresses in these establishments quickly became a huge attraction for both locals and tourists. But butler cafes, the male equivalent, took a different, more racially coded turn, with some establishments almost exclusively hiring caucasian staff. Whiteness has long been a profitable commodity in Japan, but the butler trend arrived at an economically and socially unique moment in the history of Japan. Whereas previous white man gigs in Tokyo, like playing priest in $72,000-a-pop weddings at Disneyland’s Cinderella Castle, catered to local enthusiasm for Western aesthetics, the butlers were members of an increasingly distinct group: a decorative immigrant class.

“Being white is still considered a commodity in Japan, particularly in English language teaching, translating, modeling, and within the international sections of large companies,” says Dr. Susan K. Burton, a research student at the University of East Anglia. “The gaijin job market in Tokyo is saturated right now due to higher numbers of Americans and Europeans seeking work there, combined with the continuing recession. Salaries in these professions have fallen sharply in the last few years.”

Japan is the most indebted nation in Asia, and second only to Greece globally. A two-decade-long slump in wage growth has wreaked havoc on consumer spending, stifled economic growth and lead to a deflationary doom spiral of rapidly declining prices. In a move described as economic kamikaze, the Bank of Japan introduced negative interest rates earlier this year. So instead of receiving money for saving money in their bank accounts, customers are effectively fined each month for not spending their money.

Despite these extraordinary measures, both domestic consumption and net exports have continued to slow. There is, however, great demand for unskilled factory labor, and for nurses to care for Tokyo’s aging population. For these jobs, Japan actively seeks to employ migrant workers from Asian countries, particularly the Philippines and China.

“They work longer hours for lower wages, and most intend eventually to return home to their families,” Burton, who is writing a nonfiction book about the odd careers of gaijin explains. “Due to the prevailing Japanese idea of ‘whiteness’ expressing a superior form of internationalization, white foreigners are unlikely to be considered for these jobs.”

Japan’s foreign population is less than 2 percent. Many of these, white and Asian, are working on short-term contracts. They make their money and go home. Although the Japanese government pays lip service to the idea of opening its doors to more immigrants, many are keen to keep Japan a culturally homogeneous nation. Even the descendants of ethnic Koreans who were forcibly brought to Japan during the Second World War are classed as ‘special permanent residents’. And Japan rejects 99 percent of asylum applications, accepting only 27 asylum seekers last year.

With record low fertility rates and a drastically aging population, Tokyo epitomizes the demographic challenges facing Japan. Despite this, there is little policy debate regarding immigration.

“Japanese people and politicians consider that we have more urgent problems to solve than fighting drastic aging,” says Yasuhiro Sato, professor of urban and regional economics at the University of Tokyo. “After observing recent European experiences, they believe that accepting immigration can potentially cause conflicts. This makes Japan even more reluctant to accept immigration.”

Burton agrees, adding that a fickle approach to recruitment doesn’t help: “The continuing commodification of foreigners — the idea that they can easily be hired and fired for specific jobs — actively discourages Japan from opening its doors to great immigration.”

But hope isn’t necessarily lost for Tokyo’s future. The city is at the heart of Japan’s tourism industry, and Sato believes that positive developments may lie ahead given the country’s success in attracting overseas visitors. “The number of foreigners visiting Japan for sightseeing has increased drastically during the past decade, which makes Japanese people recognize the significance and potential benefits of accepting immigration,” Sato explains.

It’s seemingly this kind of cultural change that’s required if Tokyo is to move beyond treating white foreigners as anything more than novelty entertainment. Divisions on the basis of race seem to be an inherent part of Japanese culture and society, and an accepted quirk of how things work in Tokyo for foreigners and native-born residents. But with the country’s aging population, stagnant economy, and the ongoing saga of Japan’s youth choosing careers over romance, redefining race as incidental instead of a commodity may be vital to Tokyo’s future.

Whether Japan’s capital flourishes as a welcoming and competitive global city in the decades to come seems to come down to one question: “How white would princess like her tea?”