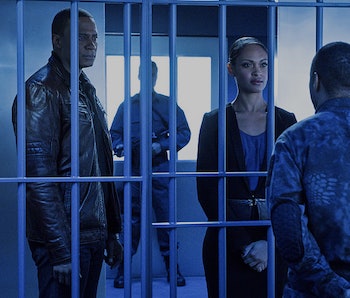 The article below contains spoilers.

On the surface, killing Amanda Waller does not seem like a big deal. This week’s episode, “A.W.O.L.” was only her second appearance this season. And after a bullet to the head, it’s definitely her last. Yet, her vacant position as head of A.R.G.U.S. — think S.H.I.E.LD. but with the tenderness of Russian special forces — could mean seismic changes for Arrow a week after the show opted for what we felt was the safe option. With this single episode, Team Arrow (and, by extnsin, The Flash’s S.T.A.R. Labs) has inherited a wealth of resources. Might they share the spoilers with their brethren on Legends of Tomorrow? Are we on the brink of a full-scale “Arrowverse Avengers” infrastructure?

“A.W.O.L.” focuses on Oliver’s two confidants: his best bro, John Diggle, and his wife Felicity, who have both certainly come a long way from being his bodyguard and IT employee, respectively. While John rebuilds his relationship with his brother Andy — a soldier for Damien Darhk — Felicity is overwhelmed in her new life as a (temporary) paraplegic. The two spend much of the episode reflecting on their respective pasts, which allows Arrow to continue its love affair with flashbacks. Meanwhile, the rest of Team Arrow deals with Shadowspire, the criminal organization profiteering from a slave labor/drug manufacturing operation on Lian Yu.

Amanda Waller aside, everyone in Arrow comes out stronger after this week’s ordeals. Felicity has regained her mojo, taking to her new codename “Overwatch” very quickly, which is incidentally the title of showrunner Marc Guggenheim’s novel. And on top of rebuilding his relationship with his brother, John may have also just inherited a very powerful military operation.

A.R.G.U.S. has been a thorn in Oliver’s side for a long time. Though they too fight threats like Ra’s al Ghul and Deathstroke’s Church of Blood, their brutal methods and lack of morals often put them at odds with Oliver’s close-knit superhero family. But with Waller gone, A.R.G.U.S.’ next logical inheritors are John Diggle and Lyla, who will guest star in The Flash to apprehend escaped prisoner King Shark. A giant shark. That talks. The word “excitement” doesn’t quite cover it.

Oliver Queen and Team Arrow are the heart of the Arrowverse. Whoever wants in on the action has to go through Oliver — this includes reincarnated Egyptian warriors. Though Oliver wasn’t exactly lacking in resources, his best friend gaining control of A.R.G.U.S. massively increases what he and the other Arrowverse superheroes are now capable of. This development is certainly ironic, as over at the Marvel House of Ideas, Iron Man and Captain America are set to clash over the issue of their government oversight in the upcoming Captain America: Civil War.

What threats will Team Arrow find itself taking on with that kind of oversight? Might any of the other team members object to being under government control? Would Oliver even want fruit from a tree as poisoned as A.R.G.U.S.? Moreover, how can Oliver use A.R.G.U.S. against Damien Darhk and H.I.V.E.?

It has been a while since Arrow had us genuinely excited about its long-term prospects.