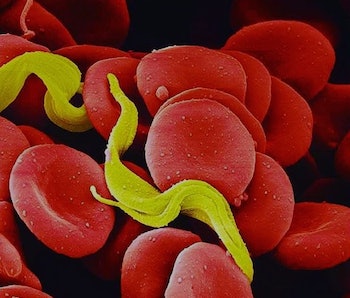 A lack of sex could wipe out a parasite that has plagued millions of people, researchers from the University of Glasgow have reported.

The organism, Trypanosoma brucei gambiense, is a single-celled creature that is transmitted to humans through the bite of tsetse flies. Once active in a human host, it can damage the nervous system to the point of coma — the reason the condition officially named Trypanosomiasis is also known as “sleeping sickness.” Originally a parasite of other animals, it began attacking humans when livestock farming started to develop in West Africa.

The World Health Organization states that Trypanosomiasis occurs in 36 sub-Saharan Africa countries. The condition kills thousands of people annually, and there is no vaccine.

However, the reproductive behavior of T.b. gambiense may result in its extinction, as the Glasgow U team has found the parasite has stopped having sex, and is now a population of clones descended from a single ancestor, as explained in the article “A co-evolutionary arms race: trypanosomes shaping the human genome, humans shaping the trypanosome genome.”

One of the advantages of sexual reproduction is the updating and mixing of genetic material — and with every living gambiense a copy of the next, a successful drug could be vastly effective.

The study’s lead author, bioinformatician Dr. Willie Weir, tells Scotland’s The Herald that “identifying this weakness in the parasite could help researchers find ways to develop new forms of treatment for sleeping sickness which build on our findings. For example, the inability of individuals to share genetic information with each other could hamper the ability of the organism to develop resistance to multiple drugs.”