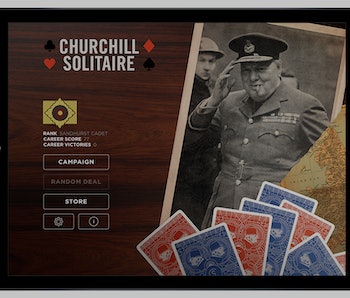 Donald Rumsfeld has a mobile app. A star-spangled Candy Crush it is not.

For 40 years, the former U.S. Secretary of Defense has played a brain-crushing version of solitaire made up by Winston Churchill himself. “It’s a card game that can frustrate even the most skilled player because a single move can make or break an entire game,” explains Rumsfeld at Medium. “A number of hands are simply unwinnable.” Poetic that a prime minister invent a game as high risk and uncertain as navigating the second World War.

Now on the App Store, anyone can think like the cigar-swilling British Bulldog through Churchill Solitaire, an app that immortalizes Churchill’s private card game into the age of smartphones. To a generation, solitaire may conjure memories of lime green screens, jumping pixels, and the hum of a CPU tower. Churchill Solitaire offers Retina HD dark oak and a sweeping soundtrack that lends the game a museum reverence even though you’re just tapping and swiping on your phone.

Tempting as it is to imagine Donald Rumsfeld writing code while snacking on Pringles, the former Secretary of Defense handed the engineering work to Snapdragon Studios while he signed off on its elements to “closely resemble the game Churchill played.” The result is a sleek and elegantly designed app that reveres the Bulldog and lulls you into getting your soul destroyed for something that would have otherwise been a distraction on a Starbucks line.

Churchill Solitaire is hell. It isn’t hard in the way one would describe games like Ninja Gaiden or Dark Souls, but Churchill’s traps are chess-like: One wrong move can be disastrous. More a puzzler than a card game, the true enemies are the player’s own individual instincts to think 10 steps ahead with laser precision. Rumsfeld, himself, admits Churchill Solitaire isn’t for “everyone” despite its mission to immortalize a clever game from a clever man. “It takes patience and perseverance, cunning and concentration, and strategy and sacrifice,” writes Rumsfeld, as if backhanding Bejeweled.

Going through smartphones is definitely how you get the attention of millennials to play a 70-year-old card game, but its intensity isn’t the straight IV shot of dopamine like Candy Crush or Peggle. But Churchill Solitaire is not about bright rewards. It offers something unlike other mobile games. As de Staercke told Rumsfeld, “What one needs in life are the pessimism of intelligence and the optimism of will.” You can’t get that slingshotting angry birds at pigs.

More like this
Innovation
3 hours ago
Indoor lights make us sick — this technology could fix that
By Miriam Fauzia
Innovation
2 hours ago
Will Miami exist in 2050? 4 strategies could keep U.S. coastal cities afloat
By James Gaines
Innovation
8.11.2022 11:00 AM
“Quantum materials” could give the human brain a run for its money, scientists say
By Nathaniel Scharping
Share: