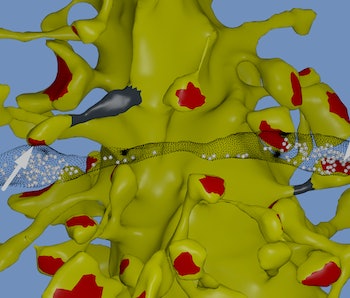 If the human memory center were a hard drive — which it isn’t quite, but bear with us — it could store roughly as much data as Blizzard uses to create its giant World of Warcraft universe. Each brain holds roughly one petabyte, says a group of American neurologists who recently measured synaptic strengths in the journal eLife. In comparison, MMO and timesuck WoW took up about 1.3 petabytes of storage, according to 2010 data.

As the researchers note, computers store data points as zeros or ones; in this study, by examining the synapses of rats’ hippocampus — the bit of brain that stores memory — they concluded synapse could have one of 26 strengths. “This number translates into a storage capacity of roughly 4.7 bits of information per synapse,” the scientists write. “This estimate is markedly higher than previous suggestions.” Given a plausible total number of synapses in a brain, that translates to a minimum of a petabyte of data in the brain. “Our new measurements of the brain’s memory capacity increase conservative estimates by a factor of 10 to at least a petabyte, in the same ballpark as the World Wide Web,” Terry Sejnowski, a neurobiologist at the Salk Institute and an author of the paper, said in a press release.

There are still big, fundamental questions about the brain we don’t know. What is consciousness? What makes memories “fuzzy”? This study refines previous estimates (more guesses, really) that each synapse was equivalent to 1 byte. In addition to giving us a better sense of our memory capabilities, this study could help computer scientists build better neural nets, the Salk Institute researchers say.