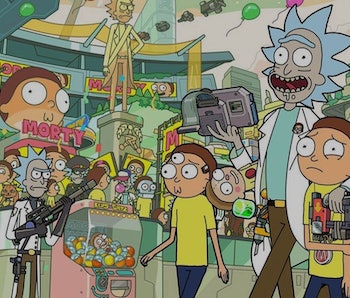 Adult Swim followed the tremendous second season of its animated sitcom Rick and Morty with the release of a mobile game Forbes called “the mobile Pokemon game Nintendo should have released years ago.”

What Forbes inexplicably missed out on was having a reporter who didn’t enjoy, and hadn’t seen most of Rick and Morty, review the game. Pocket Mortys is not just a cleaner-looking Pokemon reboot; it’s a canonized piece of Rick and Morty multiverse fiction. For fans who have to wait until 2017 for new episodes, the game is a fun way to engage with characters and spot inside jokes.

It’s rumored that Pocket Mortys will somehow be featured during Season 3 of the show, though the importance of its role hasn’t been confirmed. We could see a one-off joke where Rick plays the mobile game, or the concept of training and collecting Mortys could be a development in the show’s “Evil Morty” mythology.

There are several ways to get the full experience out of the mobile game, and many of them simply involve noticing how complex the universe has become.

Experiment with recipes at the “Craft” kiosks

Combining seemingly-useless items can yield stuff like Meeseeks Boxes, which allow the player to defeat any Morty instantly. There are many Pocket Mortys recipe lists online, but it’s also fun to experiment within the game.

One item, a VR headset used for playing Roy, doesn’t yet have a purpose in the game, and might become useful once the game receives an upgrade.

Combine your Mortys at the daycare

Some Mortys are not likely to pop up while the player is wandering around alternate dimensions, so using manipulation chips on several iterations of the same Morty allows players to combine these Mortys at the daycare center, creating improved Mortys.

Game Revolution released a list of combinations available for the first 82 Mortys.

Black out at least once

Fans of the show will feel a tug at their heart when they spot Bird Person standing in the dimension controlled by the Council of Ricks, but he doesn’t really shine unless all of Rick’s Mortys are defeated in battle.

Pay attention to the soundtrack

Each new dimension offers up an 8-bit style, reimagined version of a song from the TV show, including the opening theme, “Do You Feel It?” (the song Rick tries to kill himself to, after Unity breaks up with him), “The Tiny Rick Song”, and “Goodbye Moonmen”.

A Redditor ripped the game’s entire soundtrack, and it’s available for download here.

Collect and read the Morty descriptions

There are, in total, 82 current Mortys available in the game. As Junkie Monkeys noted, each of these Mortys is numbered with a 0 digit preceding its number, which leaves room for additional Mortys from the developers, once the game has made enough money.

Some of the Morty descriptions are silly, like each of the paragraphs accompanying the Mortys wearing different colored shirts. The Test Mortys, however, introduce a new timeline that confirms Rick’s love for Morty.

Some signs have word puzzles, and others have helpful gameplay hints, but the really memorable ones seem to come straight from Rick’s subconscious, suggesting that “Pocket Mortys” may simply be the way Rick is occupying his busy mind while in intergalactic prison. Many messages address the Smith family yearning for Rick’s return.

Not only is Pocket Mortys an enjoyable game, and the only current way to play a Pokemon-esque game on a mobile device, it explores several of the emotional themes that tie Rick and Morty together. Although Rick does use his grandson to comic effect, putting him in danger and often forgetting about him, there is a link between them that spans every dimension. As Pocket Mortys confirms, this link between Rick and Morty is powerful enough to inform Rick’s inner thoughts (as evidence in many of the wooden signs).

It’s also strong evidence that we’ll see some of Rick’s devotion to, and odd preoccupation with, his grandson in Season 3.