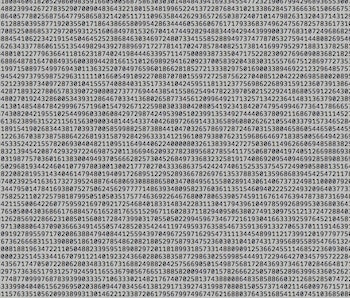 A new largest prime number can now enter the record books. But at 22 million digits, we’re going to need a bigger book.

The newest massive prime, though indivisible by any number other than 1 and itself, does fit the mold of other recent discoveries. It is a Mersenne prime, a category named for a French monk from the 17th century who found maybe the easiest way we know to search for large primes — multiply the number 2 by itself a couple of million times, then subtract 1.

The record-breaking prime can be written: 2^74,207,281-1. Curtis Cooper, a mathematician at the University of Central Missouri, is credited with the discovery, though you might claim a tiny contribution: Cooper’s lab enlists volunteer computing to crack these brobdingnagian primes.

Cooper was participating in the Great Internet Mersenne Prime Search (GIMPS), an ongoing collaboration of researchers who share ideas and computer processing power to seek out new Mersenne primes. He actually discovered the last, biggest prime number in 2013 — a Mersenne with a now-quaint 17 million digits. GIMPS claims the 15 largest prime discoveries in the past 20 years, five of them tied to Dr. Cooper’s lab.

In computer science, primes have taken on an almost mythic quality as the core of internet encryption. Huge numbers have proved resistant to any easy factoring method, so computers need an infinitely long time to determine the factors of a number with a few thousand digits. So basic encryption works by locking information behind a gateway with a large public identifying number on it and asking anyone or any computers that want access to produce the prime factors of that number.

Despite the difficulty computers face in factoring large numbers, the United States National Institute of Standards and Technology set the national standard for encryption at only 256-bit factorization in 2001, a level that many argue is now effectively obsolete with the growing size of strength of digital processing. Intelligence agencies like the National Security Administration are often on the forefront of cracking these codes, due to their universal applicability for good and bad encryption alike.

More secure connections often require greater factorization than the standard 256-bit, but in a GIMPS statement on the discovery, the team declares that the newest prime “is too large to currently be of practical value.” But also maybe this is what they want you to think.

It’s long been a piece of Internet folklore that the FBI would pay $10,000 to anyone who turned over a new, verified prime number. While this doesn’t seem to be the case, the discoverers of the new number are eligible for a $3,000 Mersenne prime award. Perhaps more tantalizing, a number of organizations are offering major rewards — up to $150,000 — for the first prime number over 100 million digits long.

The stated purpose of these rewards is to continue to push the science of finding new prime numbers forward. But with 256-bit factorization beginning to look puny compared to what our computers can handle now, it’s worth considering that one day our computers may start using unfathomably large passwords just to keep our information secure.

Basically, what we’re saying is: You should go and change your password right now, because it’s probably “football,” and that is dumb.