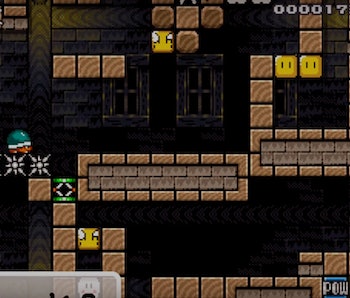 You might want to watch this carefully, if you wish to best this intense Super Mario Maker maze.

On the other hand, the Mario board has been successfully navigated in our time, although it must take an intense level of discipline as the combination of moves seems to require a pause-free attack of expertise.

More like this
Entertainment
9 hours ago
How The Last of Us Subverts a Harmful, Centuries-Old LGBTQ+ Trope
By Eric Francisco
Gaming
9 hours ago
Fire Emblem Needs To Steal a Winning Strategy From the Yakuza Games
By Hayes Madsen
Culture
12 hours ago
Final Destination 2 Perfected the Art of the Gross-Out Kill
By Jon O'Brien
LEARN SOMETHING NEW EVERY DAY.
Share: