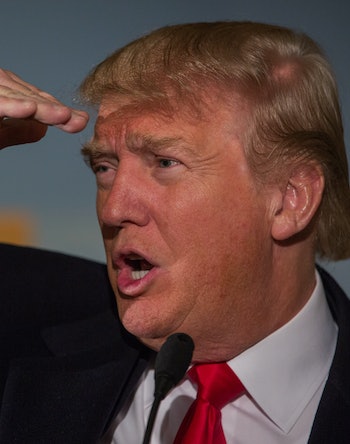 ALTOONA, Iowa — Donald Trump’s appearance here at the tenth-annual Iowa Renewable Fuels Summit may help him win the first-in-the-nation primary over competitor Ted Cruz. And it’s not about immigration or Muslims or guns. It’s about biofuels.

“We could’ve been energy independent a long time ago. I know not everybody’s there, but I am there with you 100 percent,” Trump told an assembled biofuels industry. “But you provide a tremendous service, and that’s the story. So, congratulations.”

Appearing in the early afternoon of the industry trade show, Trump gave a brief speech that was distinguishable from his typical vote-humping due to the appearance of a rare written statement. It was his pledge to stand by something called the Renewable Fuel Standard or RFS.

“The RFS is an important tool in the mission to achieve energy independence for the United States,” Trump read in a voice that hinted he may have learned the words phonetically before promising to Art of the Deal-Congress into keeping biofuel standards.

“As president, I would encourage regulators to end restrictions that keep higher blends of ethanol and biofuel of being sold,” he added.

When Trump sees a soft spot, he doesn’t hesitate. His pledge, which he said was jotted down off the top of his head a moment ago offstage, came shortly after Iowa Governor Terry Branstad, also a Republican, told reporters he wanted to see Ted Cruz lose.

“Ted Cruz is ahead right now,” Branstad said, just a few hours before Trump’s appearance. “What we’re trying to do is educate the people in the state of Iowa. [Cruz] is the biggest opponent of renewable fuels. He actually introduced a bill in 2013 to immediately eliminate the Renewable Fuel Standard. He’s heavily financed by Big Oil.”

Feeding Branstad’s paranoia are Cruz’s donors. The oil and gas industry is Cruz’s second-largest contributor, according to the campaign finance numbers at Open Secrets.

The RFS is a controversial federal program requiring that all transportation fuel sold in this country contain a minimum volume of renewable fuel, with the percentage of renewable fuel increasing year after year until it’s up to 36 billion gallons by 2020.

But in the last few years, the standard has been the cause for perpetual fighting between the biofuel and oil industry, with critics claiming it has caused inflated food and fuel costs and may even require a higher ethanol mix than engines can safely handle.

In July 2015 EPA officials were called before the U.S. Senate to defend years-long delays to changing quotas and setting unrealistic targets for percentage of corn-based ethanol to be mixed in. This month, seven trade associations filed a joint petition in the U.S. Court of Appeals to have the RFS standard’s for 2014, 2015, and 2016, reviewed, as they challenge the EPA’s authority to set requirements.

Meanwhile, there are 13 days until the Iowa caucuses, and the most recent CNN polls have Cruz just ahead of Trump at a tortilla-shell thin 27 percent to 25 percent, with nearest competitor, Marco Rubio, all the way back at 14 percent of the voters. (In a classic Trumpism, the Donald would go on to reference the latest CNN polls except when he told it Trump was ahead 30, or maybe even 40 percent.)

In ethanol-obsessed Iowa, where the cult is so powerful the West Wing even did an episode on titled “King Corn,” it’s a risky move to make an enemy of the biofuel industry employing more than 70,000 residents.