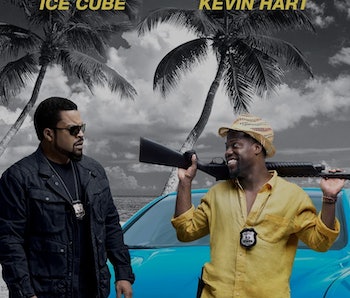 The month-long reign of The Force Awakens at the North American box office has come to an abrupt end. The buddy cop comedy sequel Ride Along 2, starring Kevin Hart and Ice Cube, beat out Star Wars for the top spot with more than $41 million over the four-day Dr. Martin Luther King Day weekend. It pulled in just over $35 million for the three-day, Friday to Sunday window for the top spot as well. But the Force wasn’t even strong enough for director J.J. Abrams’ newest movie to fit in at No. 2 either. That spot was taken by director Alejandro G. Iñárritu’s gritty survivalist drama The Revenant, which rode its Golden Globes wins and its 12 Academy Awards nominations for an estimated $39 million over the four-day weekend.

The Force Awakens managed just over $32 million. How the mighty have fallen. Though, to be fair, it’s still the world’s third-highest-grossing movie of all time and sitting pretty in the top spot on the domestic charts. But who knew a modest action comedy sequel could dethrone one of the biggest movies ever? It turns out, it doesn’t take much to kill Star Wars at the box office once its runs taper off. Here’s a breakdown of what movies took the epic Star Wars saga out of the top spots at the box office.

What Beat It: Austin Powers: The Spy Who Shagged Me

A month after debuting in 1999, George Lucas’ return to the galaxy far, far away was knocked out of the top spot by Mike Myers’ international man of mystery. It seems that audiences prefer to jump to comedies after they get a hefty helping of epic space sagas.

Attack of the Clones

What Beat It: The Sum of All Fears

Well, audiences like comedies, or forgettable sequels to overblown and boring franchises like The Sum of All Fears, which continued the big-screen covert shenanigans of author Tom Clancy’s Jack Ryan character. Weirdly enough, the character’s onscreen persona was popularized by Harrison Ford in movies like Patriot Games and Clear and Present Danger.

Revenge of the Sith

What Beat It: Madagascar

The Empire Strikes Back

What Beat It: Bronco Billy

Does anybody remember this Western that Clint Eastwood starred in and directed, about a supposed gunslinger in a traveling circus? The answer is no. But it did rustle up enough of an audience to take the second Star Wars movie off of the top spot a month after it premiered in 1980.

Return of the Jedi

What Beat It: Superman III

Look, up in the sky! It’s a bird, it’s a plane, it’s the third Star Wars movie dropping to second place because of another threequel! Superman III (the one with Richard Pryor) earned enough to dethrone Return of the Jedi after it led the box office for a month in 1983.

What Beat It: Smokey and the Bandit

Fun fact, the original Star Wars didn’t open at No. 1 at the box office in 1977. The original movie debuted in only 43 theaters, as blockbusters usually started in limited release before going wide. It eventually hit over 1,000 theaters in August on its way to becoming, at the time, the highest-grossing movie ever.