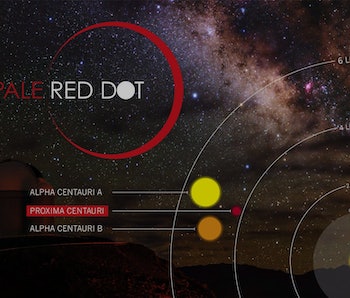 The general public can now follow a group of researchers as they hunt for an exoplanet around a relatively not-so-far-away star.

Running until April 1, 2016, the Pale Red Dot campaign will allow anyone interested in following the search in detail to plug in regularly via social media, blogs, and at the program’s website palereddot.org.

The exploration is being run by the European Southern Observatory (ESO). Using its roughly 12-foot telescope at the La Silla Observatory (373 miles north of Santiago, Chile) and its High Accuracy Radial velocity Planet Searcher (HARPS) spectrograph, the Pale Red Dot team will focus its energies on Proxima Centauri—a red dwarf star that at 4.2 light-years away is the closest neighboring star to the Sun—making it the second-closest star to Earth, of course. ESO claims there have been “hints” that an exoplanet may orbit Proxima—and the organization has announced that the Pale Red Dot study will combine its collected data with information procured through the Las Cumbres Observatory Telescope Network and the Burst Optical Observer and Transient Exploring System (BOOTES) in order to best create a comprehensive assemblage of data.

Once the project wraps in April, the site states that it will possibly “hibernate” as analysis of the data will begin, and then move through a peer review process, which may “take several months,” but promises to announce its findings as best it can.

More like this
Science
Sep. 24, 2022
Is a fact always true? A philosopher explains how to spot the difference
By Peter Vickers and The Conversation
Innovation
19 minutes ago
This sound-powered underwater camera could reveal deep-ocean secrets
By Molly Glick
Innovation
Sep. 25, 2022
ePlane? Electric planes may come sooner than you think
By Gökçin Çınar and The Conversation
Related Tags
Share: