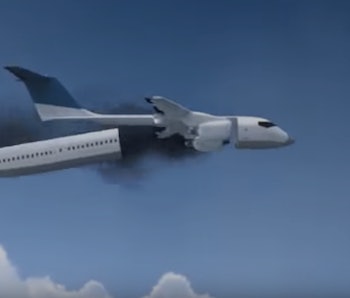 For those who are already terrified of flying, this new concept in aviation safety may or may not lend itself to a less emotionally ruinous experience.

Undoubtedly, the variables are concerning; not every plane crash results in fatalities, and with the cabin designed to detach with the press of a button, perhaps what could have been a strategic emergency landing, has now turned into a fiery metal weapon hurling its living cargo back down to Earth. The fate of pilots, as well as the aircraft’s crew, who will presumably undergo expensive and rigorous training to ensure the operation runs smoothly, is also unclear. Beyond the potential for a new and deeply unsettling way to die, the inevitable increase in ticket prices and fuel consumption are also a bit of a bummer. So far, the potential for disaster overshadows the innovation of the design and the video fails to answer some of the most basic and fundamental quandaries that engineers, crew, and passengers are sure to encounter.

Regardless of the most obvious criticism and counterproductive flaws confronting Airbus and Tatarenko, executing the design would be extremely costly and current commercial aircrafts would not be able to accommodate this next level league of remodeling; in fact, the concept would require a whole new rig, which might be one of the many reasons why commercial airlines are yet to get on board.