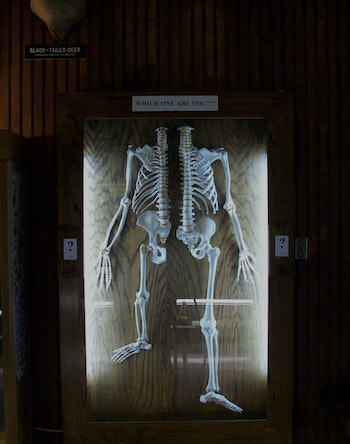 Evolution tends to be explained as tiny changes in DNA that accumulate over the course of many generations. This is entirely true, but because changes to DNA are completely random, there is actually a variety of ways that it can be changed. One of the ways that doesn’t tend to get as much attention is called copy number variations (CNV). This is a mechanism of DNA modification that can force gigantic changes in as little as one generation.

Because they can change so fast, CNVs are a very powerful engine of evolution. They allow a species to adapt to an environment very quickly (in evolutionary terms). Knowing this, scientists have looked into human CNVs to see what’s been changing in us, thinking it might give us clues as to what we’ve had to adapt to and maybe even help us understand how we work. What they found was a library of CNV changes — and one mysterious and enigmatic CNV in particular that may finally explain how the human brain got to be so big.

CNVs are possible because of something called recombination. This typically happens when you’re producing your sperm or eggs. You have one set of 23 chromosomes from your mom, and one from your dad. Each of the 23 pairs lines up and then starts swapping genetic material. Once that’s done, one set goes into one sperm (or egg), and the other set goes into another sperm. It’s a great way of generating diversity, but the way that the chromosomes line up next to each other is based on sequence similarity. So if there’s more than one place where the sequence matches, then there is more than one place for that section of DNA to align. If it lines up in the wrong place, then all of the recombination distributes the DNA unevenly into the sperm or egg.

This whole thing probably got started by viruses that insert themselves all over the genome. Each copy of the virus has the same sequence, so this got the ball rolling on copy number changes. The effect has been documented a few times. In one example, farmers began to spray peach potato aphids they saw as pests. After about 50 years, a resistant strain appeared that could tolerate the spray. When geneticists looked into their DNA, they found two genes capable of breaking down the insecticide spray, making it harmless for the aphid. When they compared this DNA to DNA from “wild type” aphids, they discovered that these two genes had duplicated many, many times in the genome since the original aphid, so they were now making a lot more of it. Apparently, there wasn’t enough of these genes in the original aphid to save them, so the genome restructured and made more.

The thing to notice is that the process of duplicating the appropriate genes and expanding that change through the population is thought to have occurred in only 50 to 60 years. Not 60 million — 60. It’s as though we’ve witnessed the generation of a new subspecies within a single human lifetime. In fact, it’s so powerful, it’s thought that all gene “families” (groups of genes with similar members) have expanded in this way.

It’s also known that this happens in humans. When scientists looked at the gene that breaks down starch and compared it to the amount of starch in a person’s diet, they found a strong correlation. Again, it has not been a million years since we’ve landed on different continents and started eating diets with different amounts of starch, so this is a very rapid change. Knowing all of this, it seems possible that the majority of the changes between humans and other great apes might not be in our sequences, but in our CNVs. After all, CNV changes wouldn’t show up in the oft-cited 97 percent sequence similarity we have with chimps.

Jim Sikela used this logic and compared human CNVs to primate CNVs. Lo, he discovered a library of changes that probably catalogues the environmental struggles we’ve faced since our split with chimps.

The data turned up some real finds. For example, FGFR8 is a gene that is disrupted in short-limbed dwarfism. The gene must somehow be contributing to longer limbs, and, coincidentally, gorillas have duplicated this gene. Of course, it’s all a correlational data set. No one has actually proven that adding or removing FGFR8 will affect limb size, but it’s a pretty strong link. All in all, it’s a very concrete example of just how pliable we living beings are, and how much our DNA can change us.

The biggest change in copy number had no known function. In fact, it’s not even an entire gene, just a fragment that encodes a domain within some proteins. This mysterious fragment is called domain of unknown function 1220, or DUF1220 (yes, there are thousands of domains without known functions).

Obligatory Simpsons beer references aside, DUF1220 is extremely intriguing. Most other mammals only have a couple DUF1220s. A few, like the cow and horse, have seven and eight, respectively. When you get to the primates, the numbers go up dramatically. Marmosets have 31, gorillas have 99, chimps have 125, and humans have 272. Not only that, but the arrangement is very different. In cows and horses, there tends to be one DUF1220 on another larger gene that already has several other domains. In primates, there tend to be genes that have only DUF1220 on them and nothing else — sometimes as many as 50 in one gene. Whatever it’s doing, it seems important.

The most obvious thing to check first is brain size. And sure enough, this rapid increase in DUF1220 copy number has a very strong correlation with both the overall brain size and cortical neuron count in primates, but not with body size. This became even more interesting when researchers sequenced the Neanderthal. Neanderthals are thought to have had larger brains than modern humans, based on skull size. Coincidentally, they also appear to have had ~300 DUF1220 domains.

So researchers began to look for correlations within the human species, and found some. The number of DUF1220s correlates strongly with “cognitive function” (based on total IQ and mathematical aptitude tests), but also with the severity of autism (though it doesn’t seem to actually cause autism). And now, DUF1220 copy number has been linked to schizophrenia, fueling the idea that autism and schizophrenia are diametrically opposed diseases.

It should be noted, though, that it’s really hard to find the differences in DUF1220 between any two humans, unless the difference is really big. You might not think that, in the age of augmented reality and sex education robots that counting would be cutting-edge technology, but it turns out it is. This is because estimating genetic copy number needs some sort of standard to compare it to, which creates a ratio. So if we’re looking at low copy number genes, we can easily find differences of, say, three vs. six. But the difference between 240 and 250 is much more difficult to see.

This is where I jumped in. The idea that we may have found the stuff that makes us smart – especially something as simple as a little more of a protein – was too tantalizing to pass up.

Using human fetal brain tissue, the team I worked on was able to show that DUF1220 expression turns on right when human cortical brain development begins ramping up, and that it’s expressed in the neocortex (which has expanded dramatically in primates). Using human neural stem cells in culture, our team was also able to show that cranking up DUF1220 expression drives neural proliferation: More DUF1220 seemed to mean more neurons.

But one thing was strange. When we added DUF1220 to a mouse or took away the one that they already have, nothing seemed to happen (except when too much was added and they simply weren’t born). Transgenic mice didn’t perform any statistically better or worse on tests of cognitive function, and their heads appeared to be normal size. Needless to say, this is not consistent with the idea that all you need to smarten you up is a shot of DUF1220.

Recently, Suzana Herculano-Houzel put the whole “brain to body size” myth to rest, demonstrating that unlike other mammals, primate brains scale their brains up in a way that keeps cell size fixed. Non-primate mammals use a system that ties neuron size to body size. So the bigger the body, the bigger the neurons, and the less dense the neurons in the brain. That doesn’t really help, since neurons are essentially on/off switches. By keeping neuron size very small no matter how big the body gets, primates are able to pack more of them in there. So maybe adding more DUF1220 didn’t do anything to the mice because their brains don’t use this system. In order to know if it works in a primate, we’d have to add more DUF1220 to a primate, but that’s a risky proposition.

One possibility is that this system is tied to the overall energy available to the developing embryo. So bigger bodies have more energy, and DUF1220 simply diverts more of that energy into cell division, rather than growth or some other process.

All of this is wild speculation, at this point. It’s very difficult to know how this will all go, because it’s difficult to make progress now that we seem to have found very human-specific features. Experimenting on non-primate mammals may not tell us anything, and experimenting on non-human primates is probably too risky for those of us who do not want to be responsible for planet of the apes.

And, of course, it’s wildly unethical to experiment on humans… although the incentive appears to be there.