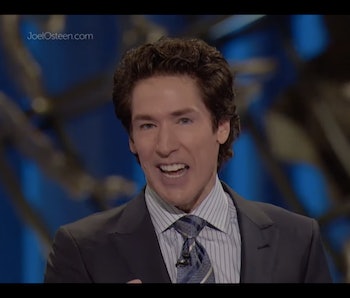 Joel Osteen has big, white teeth and a mostly white church. His books sell in bulk at Costco and, every Sunday, he stands in front of his congregation of 43,500 and preaches the “Prosperity Gospel.” Rather than get mired in doctrine or parse the syntax of the word of God, Osteen tells the Lakewood Church in Houston that their faithfulness will have material rewards.

For Osteen, markets are an instrument of divine intervention. His sermons are available to view as videos through the Lakewood Church website “for a gift of any amount.” His voice, to put it mildly, carries. And when it carried my way, I was fascinated. I listened to an episode of The Joel Osteen Podcast titled “Your Words Become Your Reality.”

“You are where you are today in part because of what you’ve been saying about yourself,” Osteen explained on his podcast. “Words are like seeds. When you speak something out, you give life to what you’re saying. If you continue to say it, eventually that can become a reality.” According to Osteen, when we speak positively, we are doing nothing less than “prophesying victory.” But to harp on and talk about negative ideas is to “prophesy defeat.”

Not knowing anyone invested in the prosperity gospel, I turned to “Science Mike” McHargue, a religious podcaster who remains fundamentally devoted to science. His podcast, called Ask Science Mike, serves as a noteworthy bridge between the increasingly polarized worlds of science and the ineffable.

“Words certainly don’t alter the physics of the universe or change any pressures on your life, but your words can change your perspective, which can in fact change your actions in meaningful ways,” McHargue says, positing that Osteen’s message gives disempowered people the psychological capacity to take actions that result in better life circumstances. “The prosperity gospel is neither ultimately good or ultimately bad. To argue either way is an oversimplification. The real danger comes in when it makes God’s blessing conditional upon people giving [money to the church]. It takes people often in desperate financial situations and tells them that giving to God’s ministry is basically a financial investment with a guaranteed return. There’s no way around it: Saying that if you give $10 to the church, God’s going to give you $100 or $1,000 is preying on poor people.”

The Gospel Coalition calls this sort of thing “the worst pyramid scheme ever.” Osteen doesn’t seem to be guilty of that, but “I don’t know that he slams the door on it either,” McHargue says.

There is, however, Biblical precedent for prosperity thinking. Passages associated with the blessing of Abraham and the parable of the talents are often cited to support this theology. In the parable of the talents, a master entrusts three servants to invest his property and earn a profit while he travels. Two of three do so, while the third “plays it safe” and does nothing, receiving a punishment upon the master’s return. And when God blesses Abraham in the Old Testament, He directly correlates Abraham’s favor to the promise that he’s going to “make a great nation” and have lots of children, livestock, and land. These were effectively the stocks and bonds of the era, God’s favor as material wealth.

(It certainly bears mentioning that there are at least as many Biblical passages that critique material wealth. In this sense, “the prosperity gospel is based on the way the Bible speaks against itself,” McHargue says.)

This theology’s central idea is that God wants you to be successful. It sets the stage for Osteen’s followers (as well as any devout followers of other prosperity preachers such as Creflo Dollar, T.D. Jakes, Kenneth Copeland, and Oral Roberts) to be faced with existential and spiritual crises when they are unsuccessful. The prosperity gospel carries with it the implicit assumption that if you’re not thriving, then you don’t have God’s favor or you’re not truly being faithful. If that plays out long-term, it can break people down and make them feel out of touch with God.

To be overly reductive, a lot of the substance of what prosperity preachers are saying boils down to “you can do this, you can get a job, you can fight this disease, God loves you.” On the face of it, it’s entirely innocuous, optimism as a religious force.

“So many people don’t believe they’re worthy of love,” McHargue says. “When Joel tells them their words create reality and their reality is that God loves them, he’s propping them up psychologically and helping them grow emotionally. At his best, Joel Osteen is parenting people who didn’t have good parenting.”

Big white teeth aside, Osteen is — giving him the benefit of the doubt — a leader of men and women who need leading. If Bernie Sanders offers a vision of America in which capital and virtue are at odds in the political process, Osteen offers something much more empowering: The idea that the economy is internal.

It isn’t. But trying does help.