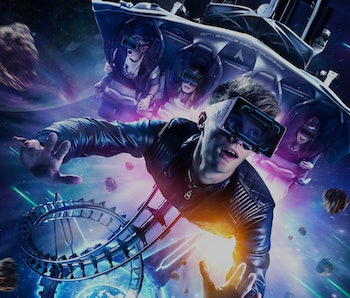 A virtual reality roller coaster is set to open in April at Alton Towers, a theme park that, as the name screams, is smack in the middle of England.

The “Battlecoaster Galactica” is being billed as the first to combine VR headsets with a physical ride. The 840-meter-long track is real; the 189-second-long vision of the cosmos and “banking through wormholes”(?) blasted at your eyeballs is not.

The public gets to climb aboard Galactica beginning in April, if all goes well (last June, the BBC reports, five people were hurt at Alton Towers when a roller coaster crashed). The ride is “customized for the full virtual reality experience, transforming riders into astronauts and plunging them into outer space with a G-force more powerful than a real rocket launch,” reads an announcement from the park.

Astronauts aboard the International Space Station might be performing cutting-edge science, but down here on good ol’ Earth we’ve got higher G-forces, VR headsets totally not slick with a stranger’s face oils, and whatever Brits eat instead of corn dogs. Suck it, cosmonauts!

Galactica is the latest experience to apply the formula VR plus X equals You’re Doing A Weird Fun Thing Now.

It’s a trend that’s only going to snowball as VR headsets become cheaper, or at least more available. VR plus fan and wings: You’re a bird! VR plus stationary bike: You’re on a Pegasus! VR plus laser tag: You’re playing laser tag, better!

The idea of a VR theme park isn’t exactly new: The creators of Universal Studio’s Jurassic Park ride want to open an all-digital world’s fair in 2017.

More like this
Innovation
8.16.2022 11:15 AM
After quitting the ISS, Russia reveals its next-gen space station
By Darren Orf
Innovation
8.9.2022 2:00 PM
A small robot on the ISS will practice performing surgery in space
By Doris Elín Urrutia
Innovation
15 hours ago
Want to take a road trip in your electric vehicle? Prepare to go off track
By Molly Glick
Share: