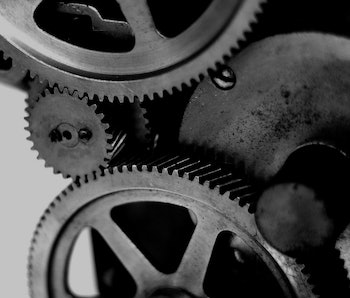 “Shouldn’t the ultimate goal of a society be 100% unemployment?” —Doug Stanhope

Accountants have a 97% chance of seeing their entire livelihood outsourced to technology within 20 years. Paralegals face 94.5% odds. You’re a bank teller? There’s a 98.3% chance that machines will put you out of work within the next two decades.

The cry has gone up Revere-style: The robots are coming. Our hyper-technological present, the doomsaying goes, is setting the stage for widespread unemployment in the future. On a long enough timeline, technology is poised to take over the whitest of white-collar jobs. So what happens to the leftover people when technology does all the work we believe is necessary to facilitate society?

The argument that automation has eliminated jobs and will continue to do so isn’t worth countering. Unless there’s a massive solar flare, the march of progress will continue steadily in that direction. In his book “Robotic Nation,” author Marshall Brain points to various money-handling systems as the tip of the automated spear. When you pay for gas at the pump, get cash from an ATM, or complete a self-checkout in a retail store, you’re making human systems obsolete. If past trends are any indication, you’ll keep doing this because it’s convenient. People have historically been fine with other people losing income.

And there’s a good reason why: Automation has only ever made the world better for the people in it. We have an implicit understanding of this even while voicing explicit concerns about the future of the middle class.

In 1772, author Thomas Mortimer spoke out against the perceived dangers of a new sawmill that required only two men to operate—Mortimer feared such technology would “exclude the labor of thousands of useful workmen.” Nowadays we don’t lose too much sleep over the wood production industry’s job numbers. From a physics perspective, work doesn’t change. From a cultural perspective, it changes fast.

Paraphrasing Aristotle, scholar John Messerly writes that “the human condition largely depends on what machines can and cannot do.” The more work machines do, the freer they leave the human race to engage in other activities. Robots now regularly carry out dangerous, precise labor that used to see humans injured on assembly lines or in factories. Technology like this is easy to cheer for because it keeps our mortality at bay. Digital accountants don’t do that. Digital accounts do something way more interesting.

Consider the example of the man who put himself out of a job at a collections agency in 2013 by writing a computer program to do his work for him. What used to require a month of effort—calculating spreadsheets to identify who owed money and feeding that data to various credit reporting agencies—now took him just 15 minutes. The only “human effort he had to exert at the office anymore was to pick up the phone and call a few people who owed money. The rest of his workday was filled with naps, movies, and researching interesting topics online. His software worked so well that his bottom-line results actually improved.

Down the road, smart machines running smart software stand to replace doctors, teachers, airline pilots, and all order of employment classically thought of as “strictly for humans.” It’s a world radically unlike the one we know now, but isn’t that the whole idea? As entrepreneur Marc Andreessen famously quipped, “Software eats the world.” This sentiment has led to panic among non-software developers, but the truth is that we can all be software developers. We can all create systems and run them. Fundamentally, that is what most of us do anyway.

What is the end result of automated intellect? Messerly envisions “a society where machines do all the work that humans don’t want to do and humans can express themselves however they like, without harming others.” This hypothetical future leaves plenty of room for people to write, create art, volunteer, and spend time with family. A world without jobs leaves us to work on our own human relationships: “All of us would benefit from such an arrangement, as we all have much to contribute to each other,” says Messerly.

The concern about this system is that it could lead towards income inequality. That’s a fair concern, but consider this for a moment: Things get better. We may need to have some brutal conversations about the distribution of wealth, but that’s not the robots’ fault. The robot are here to help.