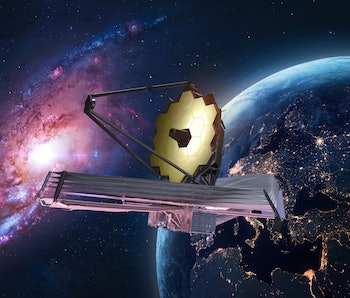 The James Webb Space Telescope is slowly finding its focus. On February 25, the Webb Telescope team released new images that show how well Webb’s mirror alignment is going, including its first “stacked” image of the star HD 84406. The pictures give a glimpse of how sharp Webb’s eye on the universe will become once mirror alignment and focusing are complete — a seven-step process that will ultimately take months.

“We still have work to do, but we are increasingly pleased with the results we’re seeing,” says Lee Feinberg in a statement released on NASA’s Webb Telescope blog Friday. Feinberg is the optical telescope element manager for the James Webb Space Telescope at NASA’s Goddard Space Flight Center.

“Years of planning and testing are paying dividends, and the team could not be more excited to see what the next few weeks and months bring,” he adds.

What’s new — NASA’s post confirms the Webb Telescope has successfully completed steps two and three of the seven-step mirror alignment process. These are:

Segment alignment is a process by which all 18 of the Webb’s beryllium and gold-coated mirror segments — which together make up what is called the primary mirror — are brought into alignment with one another so as to make a unified image possible. This process also involves some adjustment to Webb’s secondary mirror. Basically, they all have to be pointing the right way and at the right angle as a group to produce a sharp image made up of layered light.

When Webb initially deployed its mirrors after reaching its home in space, L2, the 18 mirror segments returned 18 scattered, disarrayed dots of starlight to ground teams — a good sign that the Webb’s primary science instrument, the NIRCam, could detect light, but not a great batch to make a unified composite image of a star (or any object). The NIRCam captured its first photons in early February, as Inverse reported at the time.

Since then, the Webb ground team has been slowly tweaking each segment to bring them into formation. Now, each segment works together to essentially layer the light coming into the telescope, enabling it to produce one image, rather than 18.

This gif gives you an idea of how it went down:

Image stacking is the next milestone on this journey: Those 18 focused points of light can then be layered on top of one another— or stacked — to form a single, composite picture of the star Webb is using for all this fine-tuning, HD 84406. The star lies in the constellation Ursa Major, also known as the Big Dipper.

Image stacking depends on the segments being aligned — once they were aligned, the separate 18 images could then be stacked on top of one another like a cosmic IHOP order. The process essentially directs the light captured by each segment to one spot on the NIRCam detector. In the new test, the Webb Telescope team directed six segments to redirect the light hitting them to a single point.

As a result, the 18 disparate star pinpricks form one, solid, bright star:

What’s next — These are tantalizing glimpses of how stars will appear once the Webb is fully up and running. But remember: These are just stages two and three of a seven-step process to fully align the telescope’s mirrors and get all 18 segments working as one unit. As the Webb Telescope moves through the next phases of its deployment, the star images it returns will only get sharper, more focused, and brighter.

All told, the process to get Webb ready for prime time will take three months — not long to wait in the cosmic course of time (and after decades of developing the Telescope itself).