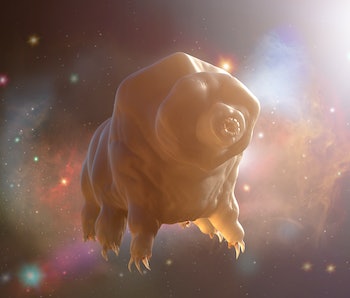 In just a few years, astronauts will walk on the surface of the Moon for the first time since the Apollo Era.

In addition to the Artemis Program, NASA’s fabled return to the Moon, there are also a number of planned missions involving the European Space Agency (ESA), JAXA, China, and Russia. By the 2030s, NASA and China hope to send crewed missions to Mars, which will culminate in the creation of a permanent base on the surface.

When it comes to interstellar missions, however, there are no plans for crewed missions on the table. While there are proposals for sending robotic missions, sending astronauts to nearby stars and exoplanets simply isn’t feasible yet.

However, according to new research led by the University of California, interstellar missions could be conducted in the near future that would have tardigrades (aka. “Water Bears”) as their crew.

The study, titled “The First Interstellar Astronauts Will Not Be Human,” was conducted by researchers from UC Santa Barbara, the UCLA Health Center, the University of Florida, and Ruhr-University Bochum. It will be published in the January 2022 issue of Acta Astronautica.

For the sake of their study, the team considered how the NASA Starlight program could enable interstellar biological studies using radiation-tolerant microorganisms capable of cryptobiosis.

In conjunction with the UCSB Experimental Cosmology Group, this program is investigating how directed energy could be used to propel small spacecraft to relativistic speeds.

In recent years, the idea of using light sails and directed energy propulsion (DEP) for interstellar missions has been investigated extensively. This includes Breakthrough Starshot, a project for an interstellar mission to Alpha Centauri in 20 years that includes experts from many fields.

One such expert is astrophysicist professor Philip Lubin, the director of the Experimental Cosmology Group and a co-author on this study. Another is Project Dragonfly, a concept that emerged from the same study that led to Starshot.

There’s also Project Genesis, an ambitious proposal to pair light sails with “robotic gene factories” to seed “transiently habitable” exoplanets with life. In all cases, the primary appeal of light sail is the fact that it does not require propellant, making it particularly light and easy to accelerate to relativistic velocities.

Stephen Lantin, a Ph.D. student from the University of Florida, is a NASA Space Technology Graduate Researcher and the lead author of this study. As he told Universe Today via email:

“Currently, most space propulsion technology relies on onboard propellant, whether that be for chemical or ion engine propulsion. However, onboard propellant is finite, which limits a spacecraft’s maximum speed. As such, it can take decades or longer for a spacecraft to reach interstellar space. In contrast, the momentum imparted to laser sails is limited only by the energy provided to a laser, which is separated from the spacecraft.”

These attributes make laser sails an especially attractive option for exploring exoplanets, particularly in Alpha Centauri, the closest star system to the Sun. For years, astronomers have struggled to determine if the system’s two main stars (Alpha Centauri A + B) have any planets of their own.

In addition, Proxima Centauri (the trinary in Alpha Centauri) hosts the two closest exoplanets to Earth, one of which orbits with the star’s habitable zone (Proxima b).

However, as Lantin and his colleagues demonstrate, a lightsail mission also has the potential to conduct deep-space biological studies that could test the effects of radiation and the extreme conditions of the interstellar medium (ISM) on living beings.

“Because it takes a shorter time to reach interstellar space using laser sails, once the technology matures (thanks to industry push in other sectors), new payloads, particularly live biological payloads, can be sent into interstellar space for the first time. This allows new research questions to be answered. How do live organisms behave in the unique radiation environment present in interstellar space?”

As an example, the team considered tardigrades (“Water Bears”), which have become the focal point of a lot of space research lately. These hardy creatures are tiny, measuring 0.5 mm (0.020 in) long, and have eight feet with claws and suction cups.

They can typically be found in moss and lichens, where they feed on plant cells, algae, and small invertebrates, but can be found in any biosphere on the planet — from mountaintops and ice sheets to tropical rainforests and deep-sea trenches.

What makes them especially interesting for space research is their resilience to extreme temperatures, extreme pressures, radiation, dehydration, starvation, and even the near-vacuum of space.

To date, several tests have been conducted where tardigrades were flown to space and exposed to extreme heat and cold, solar radiation, and even the vacuum of space. In all cases, the tardigrades endured conditions that other organisms would not have survived. They even managed to produce healthy progeny.

As such, they would be ideal candidates for testing how traveling through the ISM affects living creatures, which will have considerable implications for deep-space missions and (someday perhaps) interstellar voyages with crewed spacecraft.

There’s even the possibility of investigating whether bacteria and simple lifeforms can survive the journey through interstellar space to seed new worlds with life.

“Beyond biological research, can we lend more credence to a different panspermia hypothesis?” added Linton.

Naturally, there are a number of challenges that still need to be overcome before a mission of this type could be mounted.

“The main challenges are that it relies on laser technology maturing and will require (for short periods) megawatts to gigawatts of energy,” said Linton. “Since the technology is still maturing, interstellar missions employing laser sails aren’t quite ready for launch; they’re on the horizon, but we’re getting closer every day.”

The words “getting closer every day” apply to just about every bold and ambitious proposal for space exploration today. Whether it’s crewed missions to the Moon and Mars or reaching the nearest stars within our lifetimes, plans that have been in the research and development phase for decades are finally becoming feasible.

By mid-century, the dream of rapidly flying through interstellar space (and maybe seeing an exoplanet up close) could finally come true.

This article was originally published on Universe Today by Matt Williams. Read the original article here.

More like this
Science
21 hours ago
Astronomers May Be on the Cusp of a “Potentially Revolutionary” Cosmological Breakthrough
By Universe Today and Matt Williams
Science
Jan. 29, 2023
NASA-funded study to research if bacteria could help form building materials on Mars
By Matt Williams and Universe Today
Science
Jan. 29, 2023
This nuclear-powered X-ray “flashlight” may help scientists probe the Moon for water
By Andy Tomaswick and Universe Today
LEARN SOMETHING NEW EVERY DAY.
Related Tags
Share: