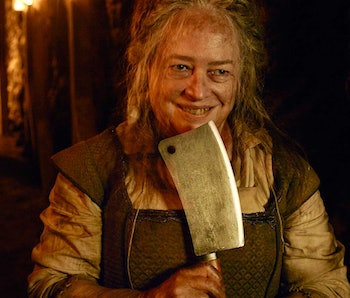 American Horror Story has covered just about every subgenre in the horror pantheon, but “Roanoke” might be the scariest. The anthology show’s sixth season told the story of the “Lost Colony” was equal parts spooky and weird, but the true story it’s based on is even weirder.

In 1855, a group of English explorers came to Manteo, an island in what’s now North Carolina, which was occupied at the time by Native Americans. The Englishmen had been sent on a military and scientific mission, and the locals didn’t take kindly to their arrival. By the year 1856, the Native Americans took action and kicked out the English, reclaiming their land, but the British returned a year later with 90 men, 17 women, and 11 children.

Three years after that, the entire group was gone. Only two clues about what happened to them were discovered: the word “Croatoan” etched into a gatepost leading to the fort, and the world “Cro” carved into a tree. Enter, American Horror Story.

What really happened at Roanoke?

Over 400 years later, we still aren’t sure what happened to those settlers in Roanoke. Science has improved by leaps and bounds since then, but even remote-sensing techniques have turned up only vague clues, like the existence of burn pits, detected by far-reaching magnetometers. Compared to what AHS implies, and based on these clues, the dominating theories explaining what happened to the Roanoke colony are pretty tame: A New World disease spread among the colonists whose transatlantic bodies were mystified by the new germs and subsequently died en masse, or perhaps a violent uprising took place and forced the colonists to pick up and head to the mainland.

But a recent theory points to Albemarle Sound, an estuary located 50 miles away and in the opposite direction of where archaeologists have looked thus far. It might be a promising candidate for explaining what happened to a fleeing group of colonists. Eric Klingelhoffer, an archaeologist at Mercer University in Macon, Georgia, told National Geographic in 2013 that soil testing showed a wooden vessel submerged underground and that artifacts dating from the 16th century were inside. “We’ve done some aerial photography,” Klingelhoffer said in an interview. “[We used] ground-penetrating radar across the most promising location for Elizabethan activity.”

Remote sensing is pretty high-tech stuff. According to the National Oceanic and Atmospheric Administration, remote sensing uses radars to detect “energy” that bounces back up to an aircraft or satellite above a specific surface. This energy, whether it takes the form of reflected sunlight or laser beams, bounces from the sensor to the surface and back to the sensor again. This technique is commonly used to track ocean wave changes and predict the weather or to source tsunamis and earthquakes. It’s highly accurate and requires basically zero interference with natural habitats. However, it’s insanely expensive (though costs are falling), and, as a scientist bluntly stated in a NASA report, “You still need to put effort into ground-truthing.” In other words, it’s fine to pew-pew a couple of laser beams onto rocks and soil and oceans, but it takes the old Indiana Jones method of swinging through ravines and digging through marshes to actually confirm what’s going on.

In the case of Roanoke, solving the colony’s mystery is an almost impossible — though researchers stress not impossible — feat. For one thing, the stuff we’re looking for is over 400 years old. The onset of climate change is fast and furious, and, combined with erosion, could disintegrate a lot of artifacts that might have otherwise proven the existence of a runaway colony (remember, this is 16th-century England we’re talking about, so the objects are probably made of wood, which any time in water will destroy).

In 2015, there seemed to be some headway in the search for Roanoke 50 miles southeast in Hatteras Island: Researchers stumbled upon “a sword hilt, broken English bowls, and a fragment of a slate writing tablet still inscribed with a letter,” according to National Geographic. But were these trade items passing through the area? Can we really know if they were just dropped here on accident or were left by colonists? We don’t know, and it leads us back to square one: Roanoke remains a frustratingly bizarre mystery that somehow has defied not just time but science and its myriad of advances as well.

So back to the sixth season of AHS. Presented as a fictional documentary series titled “My Roanoke Nightmare” — despite lasers, radars, shovels, and sheer human investigation and morbid curiosity for the past 400 years — we still have no clue at all what happened to Roanoke. That makes for a real historical and scientific nightmare.