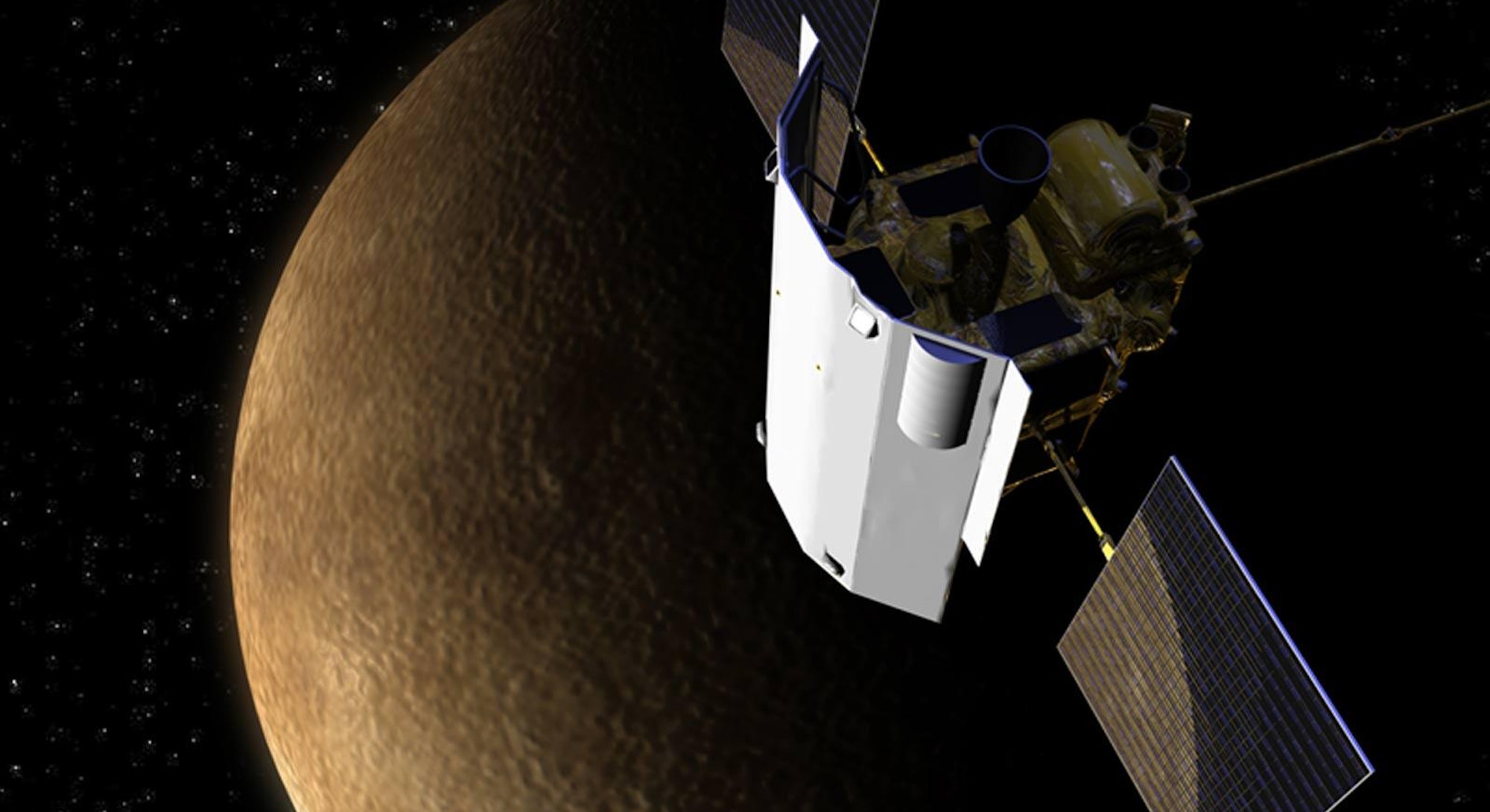 Anyone who has visited the small island of Venice, full of its romantic canals and pedestrian paths with abrupt dead ends aplenty, knows that distance does not always go hand in hand with navigational ease. Fifteen years ago, NASA performed one of its most complex navigational routes to reach the Solar System’s smallest planet: Mercury. The MESSENGER mission made its first flyby of Mercury 15 years ago today, January 14, 2008, with two more flybys of the planet after, with NASA finally inserting it into orbit on March 18, 2011.

Between its launch on April 3, 2004, at Cape Canaveral and its orbital insertion in 2011, MESSENGER had a total of six flybys of Earth, Venus, and Mercury. However, these weren’t just passive flybys; they were gravitational assists. Sean Solomon, the principal investigator of the MESSENGER mission and former director / current adjunct senior research scientist at Columbia University’s Lamont-Doherty Earth Observatory, tells Inverse that the challenge isn’t so much getting to Mercury, but getting into orbit.

“By celestial mechanics, if you send a spacecraft in towards the Sun and gain speed from the gravitational well of the Sun without slowing down en route, the speed is about 10 km/s,” Solomon explains. “That's too fast to do an orbital insertion with a propulsive burn using any conventional propulsion system that you can carry.”

Mariner 10, which performed one flyby of Venus and three flybys of Mercury in the 1970s, was the first spacecraft to view the first rock from the Sun. Solomon explained that the data from Mariner’s flybys got the scientific community excited about sending a spacecraft to do a more detailed analysis of Mercury. Unfortunately, at the time, no one knew how to circumvent the glaring issue of how quickly the spacecraft would be traveling were its trajectory to go straight from the Earth towards Mercury.

No rocket system had the power necessary to slow down a spacecraft enough for it to enter into Mercury’s orbit with the overwhelming strength of the Sun’s gravitational force emanating directly from right next door. Without major advances in rocket propulsion, like solar-powered electric propulsion, another alternative would have to be discovered to study Mercury more in-depth.

Mercury MESSENGER on the drawing board

Fortunately, in 1985, Chen-Wan Yen, was a researcher at NASA’s Jet Propulsion Laboratory who studied orbital dynamics. She built on Gary Flandro’s foundational idea for the Voyager program’s Grand Tour, which hinged on the identification of a rare alignment of the outer planets that would allow for two spacecraft to visit the four distant, large worlds in a relatively short time frame utilizing gravity assists. When spacecraft move away from the Sun, the force of gravity decreases, meaning spacecraft travel slower. A gravity assist, however, can slingshot a spacecraft by harnessing a planet’s gravitational force to accelerate.

When moving towards the Sun, a spacecraft will accelerate – too quickly to orbit Mercury; but Yen realized that planetary flybys can also be used as gravitational assists to slow down spacecraft. This was the foundation for the MESSENGER mission.

Ralph McNutt, a physicist and chief scientist for space science at the Johns Hopkins University Applied Physics Laboratory, was a project scientist on the MESSENGER mission. He is also part of the Parker Solar Probe team. The probe will make the closest approaches of the Sun of any mission. He explained that to keep the probe from getting too close, that after every third orbit of the Sun, the probe will perform a flyby of Venus.

McNutt was involved in brainstorming the idea for the MESSENGER mission, which was funded by NASA’s Discovery Program. The program offers scientists opportunities to propose new projects within budgetary limits. Many successful and well-known missions are part of the Discovery Program, including the Dawn (which used solar-powered ion propulsion), InSight, Kepler, and Pathfinder missions, amongst a wealth of others.

“There was totally still a question about what would this cost and how would you do it? But that was really the beginning of the idea,” recalls McNutt. “So we were saying, Discovery's got a cost cap, we have to be able to do this on the cheap. People were talking about solar electric propulsion, but Dawn and Deep Space One had not existed. So, we were saying, look, the technology is not there, we don't know how to develop this. So, we need to stick with a rocket launch and then try to see if we can make the gravity assist stuff work.”

MESSENGER’s complex trajectory from the launchpad to orbital insertion included one gravitational assist from Earth, two from Venus, and three from Mercury before the spacecraft was finally going slow enough during its fourth encounter with the planet that it could finally enter into orbit.

Solomon explains that what that meant was that because every flyby needed propulsive corrections to reach precise points needed to sufficiently slow down the trajectory enough to eventually enter Mercury’s orbit, the spacecraft required a great deal of propellant. He estimated that of ~1100 kg launch mass, ~600 kg was propellant.

“So more than half of the launch mess was that we needed for all of these maneuvers and for orbit insertion,” Solomon says.

More specifically McNutt says, “we launched with MESSENGER and had the second largest propellant mass fraction of any spacecraft that NASA has ever flown. Cassini at launch was about 56 percent fuel and the MESSENGER launch was about 52 percent fuel. It was because of all the speed change that you needed from all of the course corrections and in order to line up the gravity systems. And then finally, you had to do the big burn at the end to actually do the orbit insertion.”

Even with the use of solar-powered electric propulsion, BepiColombo, ESA and JAXA’s mission to orbit Mercury that launched in October in 2018, isn’t set to orbit Mercury until 2025 and will still require several gravitational assists. MESSENGER paved the way for those wanting to perform an in-depth study of the Solar System’s innermost rocky mystery.

The MESSENGER team was inspired by Mariner 10’s flybys of Mercury. The MESSENGER team had six objectives in mind when they proposed the mission. Weaving these elements together would help the MESSENGER team better understand the light gray planet’s evolutionary history and what differentiates it from the other inner rocky planets in the Solar System.

First, Mercury is made of denser material than any other planet in the Solar System, so the planet’s core accounts for a huge part of the planet’s interior, 85 percent volumetrically. Scientists wanted to understand why.

“It was really brand new territory to take to chemical remote sensing instruments and go to Mercury, measure the composition of the crust and learn something about how a very dense planet like mercury was assembled and differentiated,” Solomon told Inverse.

Next, Solomon recalled that there were many similarities between the Moon and Mercury. Both have heavily cratered regions and large smooth planar regions. But they also have a lot different — lunar maria are volcanic plains that were triggered by asteroid impacts on the moon’s far side, which have a dark pigment due to their iron and titanium content. On Mercury, the color of the plains is lighter.

Solomon explains that Mercury also has distinguishing tectonic features. “All of the major tectonic features that Mariner 10 imaged, look to be contractional features; thrust faults. So, the hypothesis came from [the Mariner 10] imaging the 45 percent of the planet, that Mercury contracted after the time that most of the surface material was laid down as a result of interior cooling, and that contraction led to these contractional landforms everywhere.”

“We wanted to substantially improve our understanding of the geology,” he says.

Mariner 10 also picked up a weak magnetic field. Scientists wanted to know if Mercury’s magnetic field was generated in the same way as earth’s magnetic field – with a dynamo liquid outer core – or if it has a different mechanism, and if the orientation is distinctive.

The team were interested in polar deposits identified by radar astronomers in 1992 suggested the presence of water ice, as well as the planet’s unique exosphere. Mercury even has a comet-like tail of sodium that can be lit up from the Sun and can illuminate details about changes in the planet’s exosphere.

MESSENGER retrieved all of the data the mission set out for and stayed in orbit collecting images and gathering data until April 30, 2015 when, after an inevitable orbital decay, it crashed into Mercury’s surface. Solomon says that the biggest surprise came from probably the two chemical remote sensing measurements. He explained that one of the measurements suggested that the state of oxidation reduction was different from materials that made up the other inner planets.

“So, it says that Mercury came from a different part of the solar nebula than the other inner planets.” Solomon says.

This would imply that there was significant chemical variation across the gaseous, swirling, pancake-like cloud, which predates the Solar System and is ultimately responsible for its formation.

The second surprise was that all the models used to explain Mercury’s metal-rich composition showed a depletion in volatiles (a type of substance that can readily change from a solid or liquid to a gas), but to the MESSENGER team’s surprise, Mercury has plenty of volatiles that are yet to be explained.

Looking more closely at the polar ice caps, Solomon says that directly on the poles you would see an almost perfectly reflective surface, which was the ice — likely directly exposed, but just off the pole, the ice was covered in about 20 cm of a very dark material that does not reflect light. He shared that surprisingly, you are most likely to encounter this kind of dark material in the outer system in places like small satellites of major planets, out beyond the main belt, and in Kuiper Belt objects.

“The hypothesis that has long been advanced to explain these very low reflectance values is that they are covered by some kind of complex organic material,” he said.

He likened them to comets, which are a combination of ice and other materials and often described as dirty — the idea being that on Mercury, these complex organic ‘dirty’ materials keep ice stable.

MESSENGER also ended up finding elemental carbon (likely graphite) at the surface, which Solomon says probably contributes to the darkening of some of the darkest parts of the Mercury surface.

“We associate carbon with compounds that don't condense until further out in the Solar System,” he says. “So, Mercury is an anomaly in many respects and yet, there it is, in the innermost Solar System, it seems.”

Will we ever land on Mercury?

MESSENGER paved the winding trail from Earth to Mercury and answered many of the looming questions scientists had about the planet’s nature, but in doing so, it may have raised more questions than it answered.

However, McNutt pointed out that while MESSENGER might be out of commission, the crash site of MESSENGER may still be useful. It can act as an end member datapoint for BepiColombo if they want to see a new crater on the planet’s surface and compare it to the older craters.

McNutt is also an advocate for the next step: a lander.

“Is this ice that we're seeing now, in the polar regions of Mercury actually from comets that have bombarded Mercury over the past? And if so, were there organics in some of those comets? And as a result, have some of those have been left in some of the materials that we see near the poles?” he asked rhetorically. “And one of the ways that you go and solve that is you put a lander down on one of the poles, and you actually spectroscopically look at this stuff, and try to figure out what it is you're looking at.”

Editor’s note — This story was amended on January 16, 2023 to fix the orbital insertion date and that polar deposits were discovered by radar astronomers, not the Mariner 10 probe.