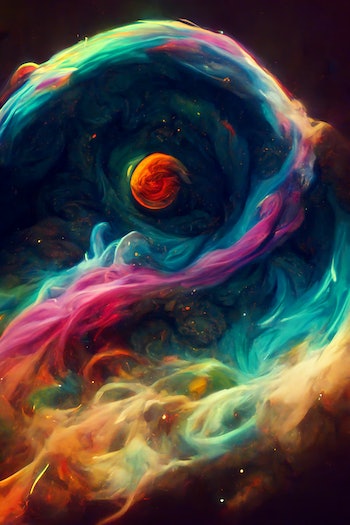 The phenomenon represents an unusual occurrence in Martian space weather, and scientists are excited to take advantage of future collaborations between spacecraft to keep an eye out for repeat events.

The odd, patchy aurora created by the solar wind was observed twice, on August 11 and August 30 this year. A similar aurora has been observed regularly since 2018, but usually, it occurs in a smooth, even band that covers the planet. Last month’s aurora was patchy, variable, and locally occurring by contrast.

It’s a specific type of aurora called a proton aurora and occurs on the day side of the planet when hydrogen atoms from the Sun, stripped of their electron, blast toward the red planet and penetrate the “bow shock,” a magnetic barrier that naturally shields Mars’ atmosphere. Some of the protons can bypass the bow shock by stealing electrons back from the busy region of space around Mars, becoming neutral and breaking through to hit the upper atmosphere. The result is an ultraviolet aurora that, until now, always seemed to occur as a coherent whole across the face of Mars but has now been seen in distinct patches.

Proton auroras occur on Earth too, but they can’t be seen by human eyes and are rarer due to Earth’s stronger magnetic field.

It took observations from both MAVEN and EMM to understand what was going on. EMM’s Emirates Mars Ultraviolet Spectrograph (EMUS) instrument is constantly scanning the upper atmosphere of the planet, watching for evidence of atmospheric escape into space and changes in composition. Its detector is perfect for catching the ultraviolet light caused by the proton aurora.

MAVEN, meanwhile, captures in-situ data, “feeling” the plasma of the solar wind as it passes by with a magnetometer and ion analyzers.

When EMM’s data was compared with MAVEN’s, it was clear that the patchy proton aurora resulted from a highly disturbing plasma environment at the time of the events.

Mike Chaffin of the University of Colorado, Boulder, explained that “EMM’s observations suggested that the aurora was so widespread and disorganized that the plasma environment around Mars must have been truly disturbed, to the point that the solar wind was directly impacting the upper atmosphere wherever we observed auroral emission. … By combining EMM auroral observations with MAVEN measurements of the auroral plasma environment, we can confirm this hypothesis and determine that what we were seeing was essentially a map of where the solar wind was raining down onto the planet.”

Essentially, it was a temporary breakdown of Mars’ natural defenses against solar radiation when particles were able to take advantage of the chaotic space weather to find a way down to the planet’s atmosphere.

MAVEN arrived at Mars in 2014 and was joined by EMM in 2021. There are more than half a dozen probes in Martian orbit, each with different specialties and capabilities. Working together, they can help us understand Mars in a way that they cannot do on their own, including studying its unique auroras.