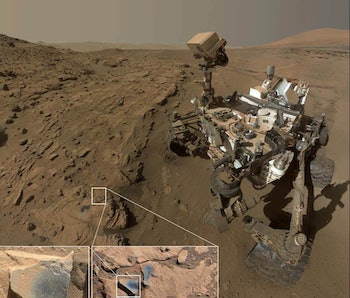 Earth’s oxygen-rich atmosphere does more than provide the foundation for complex life. The oxygen in the atmosphere is so reactive that it readily combines with other chemical elements. Together, they form important ores like iron oxides and manganese oxides found in the Earth’s crust. So, when rovers spotted manganese oxides on Mars, scientists interpreted them as clues to Mars’ earlier atmosphere: it must have contained oxygen.

But a new study puts the brakes on that idea.

Both Gale Crater and Endeavour Crater contain manganese oxides. We know this thanks to MSL Curiosity (Gale Crater) and the Opportunity Rover (Endeavour Crater.) The discovery suggested that Mars at one time had not only oxygen in its atmosphere but also surface water.

“These high manganese materials can’t form without lots of liquid water and strongly oxidizing conditions. Here on Earth, we had lots of water but no widespread deposits of manganese oxides until after the oxygen levels in our atmosphere rose,” said Nina Lanza, a planetary scientist at Los Alamos National Laboratory. Lanza was the lead author of a 2016 study on manganese oxides on Mars.

But a new study in Nature Geoscience shows how atmospheric oxygen may not have been necessary for the formation of Martian manganese oxides. The study is “Formation of manganese oxides on early Mars due to active halogen cycling.” The first author is Kaushik Mitra, who completed this work as part of his graduate research at Washington University.

Manganese is the tenth most abundant element in Earth’s crust, and there are over 30 manganese oxide minerals. People have been using them for thousands of years. Neanderthals may have used them to start fires, and paleolithic cave artists used them in their paintings. The ancients used them as pigments, too, and to clarify glass. In modern times, we use them in metal ores, dry cell batteries, and as catalysts in hydrogen production.

On Earth, they’re ubiquitous in soils and sediments, and they’re widespread because of our planet’s oxidizing atmosphere. They usually form “at the interface between the lithosphere and hydrosphere, atmosphere and/or biosphere,” according to a 1999 research article. On Mars, the rovers found the manganese oxides in aqueous fissures and veins in the rock using x-ray spectrometry.

When rovers found them on Mars, the natural conclusion was that the conditions that created them here on Earth must have been present in some form on Mars. Mars’ ancient habitability is a topic that holds our attention, so the findings were intriguing.

But the new research identified another pathway to manganese oxides that don’t require oxygen. Instead, the halogen elements chlorine and bromine are behind Mars’ manganese.

Jeffrey Catalano is the corresponding author of the study. He’s a professor of Earth and Planetary Sciences at Washington University St. Louis and is also a faculty fellow of the McDonnell Center for the Space Sciences.

“The link between manganese oxides and oxygen suffers from an array of fundamental geochemical problems,” Catalano said in a press release. “Halogens occur on Mars in forms different from on the Earth and in much larger amounts, and we guessed that they would be important to the fate of manganese,” Catalano said.

“One of the main differences between Earth and Mars is that Mars is rich in halogens, elements like Chlorine and Bromine. Mars is a halogen-rich planet, with chlorine and bromine concentrations in bulk Mars about four times greater than on Earth,” lead author Kaushik Mitra told Universe Today. Chlorine and bromine are both halogens, and chlorate and bromate are the dominant forms of both on Mars.

Chlorate, in particular, is a powerful oxidizer. Could it have provided the oxygen needed to create the manganese oxides? There’s a precedent in the way we treat our drinking water.

“We were inspired by reactions seen during chlorination of drinking water,” Catalano said. “Understanding other planets sometimes requires us to apply knowledge gained from seemingly unrelated fields of science and engineering.”

“Untreated drinking water has contaminants, and therefore we ‘treat’ it before consumption,” said lead author Mitra. “There can be different types of contaminants: organic matter, microbes, metals (like lead), etc. Manganese can be one such contaminant,” Mitra explained.

This is where critical differences between Mars and Earth come into play. These differences undermine the tempting assumption that finding the same chemicals on Mars that formed on oxygen-rich Earth necessarily means that ancient Mars was also oxygen-rich.

Not only are there far greater concentrations of both halogens on Mars, but the whole chemical environment is different. And chemical reactions are never about just the chemicals themselves. The environment the reactions take place in dictates much about the reactions, and in this case, the atmosphere and the pH were different than on Earth. “Additionally, the atmosphere of early Mars was likely CO2-rich, which is also different from Earth,” Mitra told UT. All that CO2 dictated the pH of Martian water.

How they did it — The researchers performed laboratory experiments with both chlorate and bromate to oxide manganese samples in water. The water was made to reproduce the water on ancient Mars, which would’ve been mild to weakly acidic with a pH between about 3.5 to 6.5 due to the CO2-rich atmosphere.

Their experiments showed that the rover-observed manganese oxides could not have been produced by an oxygen-rich atmosphere when taking temperature, pressure, and pH into account. It comes down to time scales. The manganese oxide layers the rovers found were very thick, indicating a rapid buildup. If an oxygen-rich atmosphere were responsible for the manganese layers, the experiments show, they would have been very thin, perhaps as thin as 20 nm.

“The rate of Mn(ii) oxidation by O2, both homogeneous and surface catalyzed, is slower than by bromate,” the paper states. Mars’ low pH plays a critical role in this. “As demonstrated by the results, bromate can oxidize Mn(ii) down to pH~3 where Mn(ii) oxidation by O2 becomes about 108 × slower (100× decrease in rate with each unit pH decrease.).”

The experiments also showed that while bromate was able to oxidize manganese at a rate that can explain the rover findings, chlorate was not. “Unlike bromate, chlorate produced no observable Mn(ii) oxidation in homogeneous systems in this study.” the authors write in their study.

“In our paper, we show that if oxygen were to produce the manganese oxide layers, then the oxide layers had to be thin,” Mitra told Universe Today. The rovers’ x-ray spectrometry found greater concentrations of manganese oxides than would be present in a nanometer-range layer. “There are thus substantial kinetic and thermodynamic barriers to O2 having served as the oxidant that produced fracture-filling manganese oxide deposits on Mars.”

Since they’re not that thin, there had to be another way they became oxidized. The experiments showed that Mars’ high concentration of bromate is responsible for creating manganese oxides.

“Oxidation does not necessitate the involvement of oxygen by definition,” Mitra said. “Earlier, we proposed viable oxidants on Mars, other than oxygen or via UV photooxidation, that help explain why the Red Planet is red. In the case of manganese, we just did not have a viable alternative to oxygen that could explain manganese oxides until now.”

Mars is a puzzle we’re only beginning to put together, and sometimes we gloss over the many fundamental differences between the two planets. It can be tempting to think of Mars as an “Earth gone wrong.” While Earth still has a magnetosphere, a rich atmosphere, and oceans, Mars might’ve had all of these until something went wrong, and the planet became barren.

Just because this study questions the existence of an oxygen-rich atmosphere doesn’t mean it rules out life on ancient Mars. After all, not every life form on Earth needs oxygen. In fact, when life first appeared on Earth, the atmosphere wasn’t rich in oxygen. There are still simple life forms that get by without it.

“There are several life forms even on Earth that do not require oxygen to survive,” Mitra said. “I don’t think of it as a ‘setback’ to habitability — only that there was probably no oxygen-based lifeforms.”

On Earth, types of simple lifeforms called obligate anaerobes exist without oxygen and, in fact, cannot survive in the presence of even low levels of molecular oxygen. And in 2010, scientists found three new complex multicellular life forms in the Mediterranean seafloor that don’t need oxygen. They spend their entire lifecycle under permanently anoxic conditions. So there’s precedent for life on early Mars even if it lacked an oxygen-rich atmosphere.

This study won’t be the last word on Mars, manganese oxides, and the planet’s ancient conditions. It’s just another important piece of the puzzle. In about a decade or so, scientists will hopefully be in possession of some additional pieces of the puzzle, maybe the most important ones yet: the samples the Perseverance rover is gathering in Jezero Crater.

“As of now, we have limited information about the Martian rocks and minerals, including manganese oxides,” Mitra told Universe Today. “We did not have mineralogical data from the manganese-rich sedimentary rocks.” Instead, the rovers provided elemental data, and researchers deduced the mineralogy from that.

“Having mineralogical and other microanalysis data (like isotope analysis) could give so much more information,” Mitra explained in an email exchange. “Therefore, having the samples from Mars is critical to understanding the chemical processes that happened on the surface in the past and will give us a much-improved understanding of past geological, geochemical, environmental, and habitable environments on Mars.”

This article was originally published on Universe Today by EVAN GOUGH. Read the original article here.

More like this
Science
Jan. 12, 2023
No, the Curiosity rover didn’t find gem opals — but it may have found something more important
By Doris Elín Urrutia
Science
Jan. 22, 2023
Scientists have found a subtle way to hunt for life on exoplanets
By Evan Gough and Universe Today
Science
Jan. 22, 2023
One of the universe’s most iconic nebulas is changing — astronomers don’t know why
By Nancy Atkinson and Universe Today
LEARN SOMETHING NEW EVERY DAY.
Related Tags
Share: