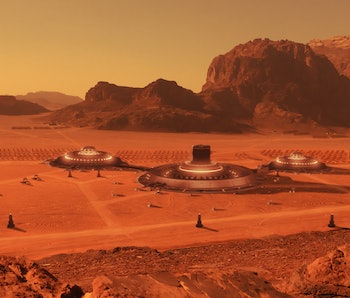 Materials science has long taken the lead in space exploration research, and it seems to have been getting even more attention than usual lately. That is especially true for building materials.

NASA has funded several new research programs to develop new building materials that can do everything from providing structure to future human habs to landing pads for future reusable rocket missions. Now that second goal is one step closer, thanks to researchers at the University of Delaware.

Their recent paper in Advances in Space Research describes a method for making a type of geopolymer out of Martian and lunar regolith simulants. Geopolymers are an advanced form of concrete that has enhanced physical properties such as compressive strength and thermal tolerance — precisely the type of properties you want to be stronger if you’re trying to build a retro rocket landing pad.

Landing a rocket on another planet (or moon, for that matter) is risky. Dust and rocks blown skyward by the downdraft of the column of flame the rocket emits could damage the rocket itself or anything that it might be carrying, such as humans. The best way to stop that potential hazard would be to build a landing pad. However, one made with regular concrete can’t withstand a rocket blast without breaking itself into the kind of chunks most dangerous to rockets. That is where geopolymers come in.

With their extremely physical and thermal properties, they are ideally suited to serve as the landing pad material for rockets. The only problem is — how do you make them off of Earth? That was the focus of the team in Delaware.

They used Martian and lunar regolith simulates as a basis for making the geopolymer, which was created using a combination of clay and a solvent with a high pH — in this case, sodium silicate. After mixing the two materials, the researchers let the resulting mixture cure for seven days before testing the new material’s properties.

Under Earth-like conditions, the materials they created had the kind of properties they were looking for. However, Maritan conditions were not as congenial. At -80 C, the reaction to form the geopolymer hardly happened at all. Additionally, in a vacuum, which is also the natural state of the Moon or Mars, the formation didn’t happen as well as it did under ambient Earth conditions.

Two solutions present themselves — either future space explorers could use a system that heats up and pressurizes the extraterrestrial clay so that the reaction would happen as expected, or further material advances could point to potential solutions that could be done at ambient temperatures on the Moon and Mars. Either way would require more research.

But there’s not only work on the material science side — sodium silicate isn’t particularly common on Mars. It would require hundreds to thousands of kilograms of the stuff to make enough geopolymer for even a single landing pad, which is expensive if launching it from Earth, though it could be done with a single rocket payload. In addition, more recent research just reported that clays might not be as common as initially thought on Mars, making the other material component of the geopolymer harder to find as well.

Either way, explorers will eventually need a landing pad to ensure their descending (or ascending) rocket isn’t blasted into shrapnel by fast-moving rocks. And geopolymers seem as good a solution as any offered so far. Material science keeps marching forward, and someone someday will find a long-term solution.

This article was originally published on Universe Today by Andy Tomaswick. Read the original article here.