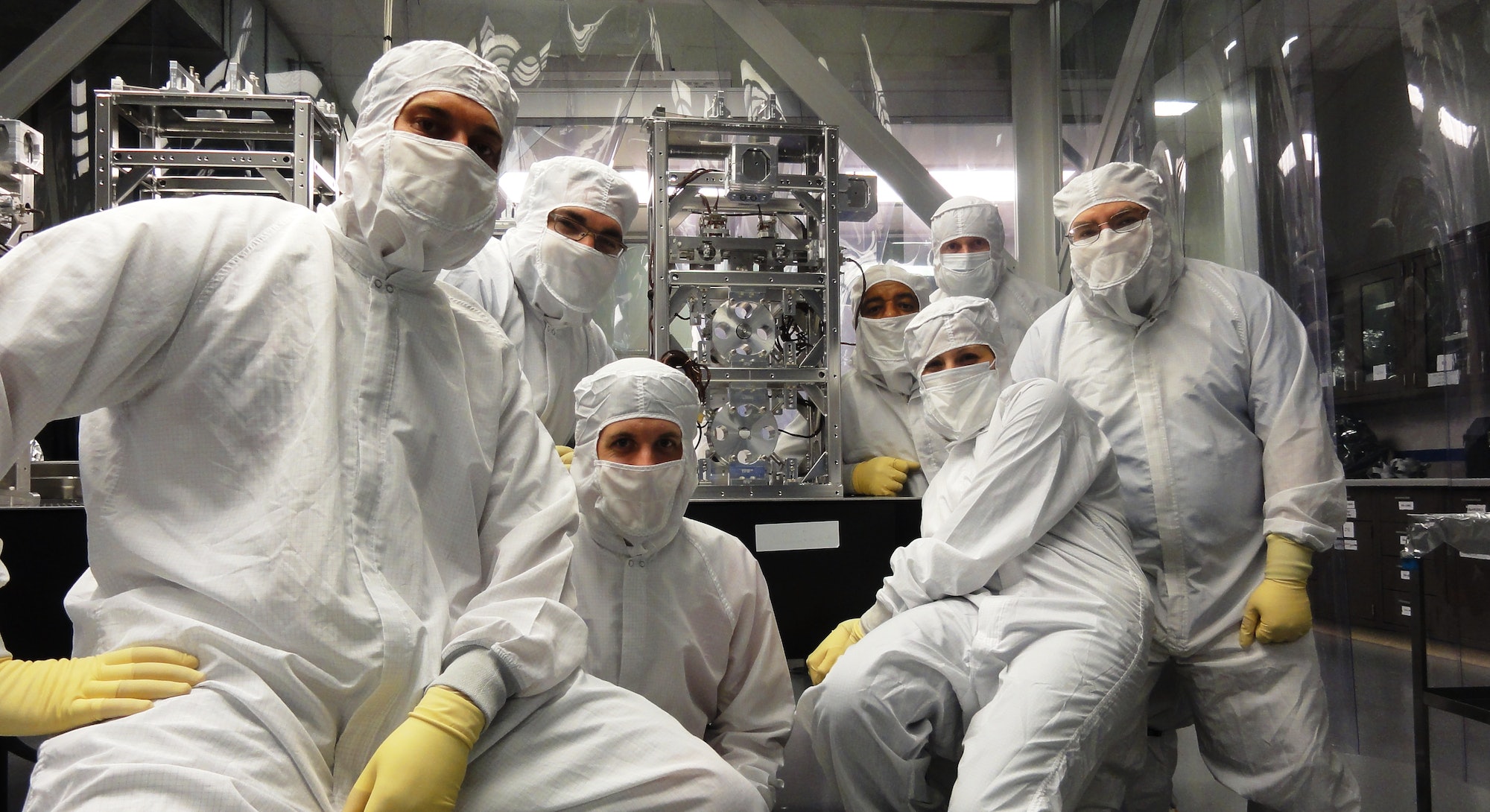 Over a billion years ago, in the distant universe, two black holes collided.

They spiraled around one another, several times per second, before crashing into each other, merging into a single, even bigger black hole.

Such a collision creates tiny ripples in the fabric of space-time, known as gravitational waves, akin to a seismic wave spreading from an earthquake.

The existence of gravitational waves were first predicted by Albert Einstein over a century ago in his general theory of relativity. Einstein himself was dubious his prediction would ever actually be proven. While these waves were thought to exist for decades, they had yet to be seen.

Relieving Einstein of his doubts was the Laser Interferometer Gravitational-Wave Observatory, or LIGO — a large-scale physics experiment and observatory — who, at 5:51 a.m. Eastern on September 14, 2015, observed a gravitational wave signal from these two gargantuan black holes becoming one.

In 2017, the Nobel Prize in physics was awarded to three physicists, Kip Thorne, Barry Barish, and Rainer Weiss, for their work with LIGO on gravitational waves.

THE DREAM — In the early 1960s, Joseph Weber, a physicist at the University of Maryland, was the first person to ever search for the elusive waves. He built his own contraption to catch them, a six-foot-long resonant bar that he called the “Weber bar.” In 1969, he announced he had done it: he had observed gravitational waves.

The world was stunned, Weber was catapulted to fame, appearing on the cover of magazines and becoming a household name. However, his acclaim was to be short-lived; his findings were quickly refuted by other scientists. Despite his lack of success, Weber’s attempt inspired a generation of wave-hunters.

Weber’s false alarm turned out to be only one of the many that would follow over the years. “So, the field actually got started in a somewhat awkward way,” laughs David Reitze, executive director of the LIGO Laboratory and a professor of physics at the University of Florida.

“Hey, you know, we really need to work together.”

Following Weber’s failure, other physicists, including Rainer Weiss and Kip Thorne, began to think, “Well, how would one make a gravitational wave detector?” Weiss devised his own version of an instrument called an interferometer that looked like it could do it, and, with funding from the National Science Foundation, the construction of LIGO was approved in 1990.

The two locations for the detectors, one in Hanford, Washington, and one in Livingston, Louisiana, were purposefully chosen as they clocked in at nearly 1,900 miles apart, meaning that any detection at one operation could be easily double-checked at the other. Even more importantly, by looking at the time difference between when a wave hits the different detectors, the researchers could pin down the locations and sources of gravitational waves coming from space.

How does it work? Lasers are fired into long, L-shaped tunnels, with two arms reaching 4 kilometers long, with mirrors at either end. As each laser beam reaches the end of a tunnel, it bounces off the mirror and heads back in the opposite direction, returning at exactly the same time. If a gravitational wave were to pass through, it would alter the length of one of the arms and the laser beams would be shifted ever-so-slightly out of sync.

The greatest feature of the detectors — their razor-sharp levels of sensitivity — also turns out to be their greatest irritant. “A car driving by, somebody walking across the floor of the experimental hall, all excite the detector,” Reitze says.

The entry bar for the project was pretty low, says Reitze. “Basically, the doors were thrown wide open. Anybody who wanted to could join and work for LIGO.” Which turned out to be a really smart idea.

First going online in 2000, for nearly a decade, LIGO hunted for the cosmic ripples — and their search came up empty. But that wasn’t the main goal of the first iteration of LIGO (which they now call Initial LIGO). They were trying to prove that it could work, and to understand how to build a better one.

In 2015, the facilities at LIGO underwent a huge makeover, taking five years and 200 million dollars. The new and improved LIGO — called the Advanced LIGO — was three times more sensitive than its predecessor.

THE TEAM — LIGO started with just 250 people. Today, it has over 1,400 members, spread all over the world. The collaboration is made up of researchers from all over the map, from over 100 institutions in 18 countries, including the UK, Australia, Germany, and Japan.

Joining the effort in 2017 was the Virgo interferometer, near the city of Pisa, Italy. “A few very smart people in LIGO and Virgo got together and said, ‘Hey, you know, we really need to work together, we should share our data; we should basically run our experiment, not as two competitive experiments, but as one collaborative experiment.’”

And so they teamed up. Joining the network too was the interferometer GEO600 in Germany, and a detector in Japan called KAGRA, which ran for the first time this year. There are also plans in place to construct another LIGO interferometer in India.

HOW THEY STAYED CONNECTED — Because the members of the project are so spread out, differing time zones prove to be a big challenge. “You've got to find a time when everybody can get on a phone,” Reitze says. They also hold lots of collaboration meetings every year, where everybody in the project comes together in one place.

Another issue was trying to build an organizational structure that toes the bureaucratic line but also keeps everyone in check. “In any collaboration, we're all human, so there's a lot of individuality, meaning there's sometimes conflicts, and those conflicts can sometimes get ugly,” says Reitze. But part of his job is keeping everyone working together harmoniously.

WHY COLLABORATING WAS SO IMPORTANT TO THE MISSION — The classic image of the lone astronomer, going out at night with their telescope to observe, has started to fall away, Reitze says. Today, the best science can only be done together.

Why they decided to go international, Reitze says, is because “you collaborate with where the best groups are.” But bringing together Virgo and LIGO had some growing pains. “Believe me when I tell you that it was very difficult to bring together two different collaborations who have two different ways of doing business.” Both from a technical standpoint — LIGO was about four times larger than the Virgo collaboration — but “also from a sociological standpoint,” he says.

According to Reitze, it took years to get to a point where there was a good, comfortable working relationship between everyone. “In LIGO, people believed, ‘Well, we have two detectors, so, therefore, we should be the more powerful of the collaborators’. And Virgo said, ‘But you need our detector, so we should all be equals.’”

SO, DID THEY ACHIEVE IT? The detection was never meant to happen. When the renovations were completed, the detectors were turned back online. But a whole host of issues began to arise, and they debated whether to turn the whole detector off. But luckily, Reitze says, they decided to just keep it running while trying to fix the problems.

“And then ‘bam.’ That's when the gravitational wave signal came in.” The detector had only been online for two days.

The first person to notice was Marco Drago, a 32-year-old Italian postdoctoral student in LIGO, who was sitting at his computer at the Max Planck Institute for Gravitational Physics in Hannover, Germany. He told someone, and the news spread like wildfire within the project. Neither Virgo nor the interferometer near Hannover were in operation at the time, so they couldn’t confirm the signal.

The second he saw it, Reitze knew this had to be the real deal. Gravitational waves have a very unique sound — called a chirp, sweeping from low to high — that is instantly recognizable. (You can listen to what it sounds like here.)

Rainer Weiss, the physicist who first suggested building LIGO, was on vacation in Maine at the time and learned the news when he logged in that morning. “It was waving hello,” he told the New York Times. “It was amazing. The signal was so big, I didn’t believe it.”

However, within the science community, not everybody could believe it.

On a routine basis, secretly inserted was something called a blind injection — blind, because only a few people in the operation would know that it was happening. They simulate gravitational waves and are used to test whether the team can spot a real one from an imposter, to keep them on their toes.

Even though they avowed that the blind injections for that month hadn’t even been made yet, Reitze “got many phone calls from many people, saying, ‘It must be a blind injection, surely, surely, this is just a way to test the collaboration.’”

Just presenting their detection was not enough proof, either. It took them a couple months of analysis work, double-, triple-, and quadruple-checking their data, but they finally proved what they saw: it was the genuine article.

A possibility they also had to take into consideration was that someone had potentially hacked in and planted the signal. The only person who could’ve done it was someone within the organization who knew everything about the detector. “So, we actually talked to some people inside the collaboration and asked, ‘You didn’t do this, did you?’” But none of the suspects had a plausible motive.

“Thank God, Jesus. We finally made it.”

The next task at hand was to write up the results. “That took a long time — months,” Reitze recalls. “I think we went through 14 revisions of the paper.” This was due in large part to everybody having a different idea of what the paper should look like. The final version had more than 1,000 authors.

On February 11, 2016, the news was announced in Washington, D.C. By that point, rumors had swirled rampantly. “We were getting queries from journalists every day, starting from when we first ever even saw the signals,” he says.

How did they feel? “A sense of joy, a sense of amazement, a sense of wonder, but, I think, for a few people who'd been working in the field for a long time, they felt a sense of relief. Thank God, Jesus. We finally made it.”

There had been a ton of pressure mounting, Reitze says. They had been warned that if they didn’t make a detection soon, that the field wasn’t going to receive any more funding. By that point, the National Science Foundation had invested over a billion dollars in the effort.

The announcement was met with fervent applause and cheering. “Einstein comes out being a success,” Kip Thorne, one of the pioneers behind the experiment, said at the press conference.

"Gravitational waves provide a completely new way at looking at the universe,” the late physicist Stephen Hawking told the BBC of the news. “The ability to detect them has the potential to revolutionize astronomy.”

WHAT’S NEXT — Detecting gravitational waves pushes off a whole new era of astronomy. It will allow science to delve deeper into the universe and may also shed some much-needed insight into the Big Bang.

LIGO is making plans to unlock some of those mysteries. The detectors are being upgraded again, and there are also plans to build a bigger and better detector, called the Cosmic Explorer. “It will be LIGO times 10” says Reitze.

It was a discovery that was decades in the making. “It's an amazing thing to me that, 10 years ago, a lot of people thought that detecting a gravitational wave was almost impossible to do,” Reitze tells Inverse. “And now it's routine. I mean, now, we see a signal every six days.”