"No one has ever seen this before": Jupiter’s Great Red Spot is speeding up

“No one has ever seen this before”

Michael Wong of the University of California, Berkeley. 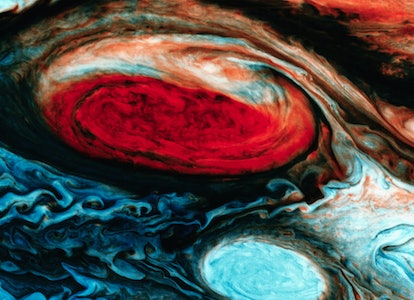 The Great Red Spot of Jupiter — the largest storm in the solar system — has been raging for centuries.

Over the past 100 years, however, the cyclone has been dwindling, but recent observations with Hubble show that the wind speeds may be picking up again. Is this just temporary, or will the storm return to its former glory?

Using the Hubble Space Telescope, a team of astronomers has been monitoring the Great Red Spot for over a decade. They discovered that the wind speed of the outermost edge of the storm, known as the high-speed ring, has picked up speed by eight percent between 2009 and 2020.

“When I initially saw the results, I asked, ‘Does this make sense?’ No one has ever seen this before,” said Michael Wong of the University of California, Berkeley, who led the analysis. “But this is something only Hubble can do. Hubble’s longevity and ongoing observations make this revelation possible.”

While meteorologists have a fleet of orbiting spacecraft to continually monitor storms on Earth, tracking the evolution of the Great Red Spot is far more challenging.

“Since we don’t have a storm chaser plane at Jupiter, we can’t continuously measure the winds on-site,” explained Amy Simon of NASA’s Goddard Space Flight Center in Greenbelt, Maryland, who contributed to the research.

“Hubble is the only telescope that has the kind of temporal coverage and spatial resolution that can capture Jupiter’s winds in this much detail,” she said.

The changes to the storm have been very slow and steady, amounting to an additional 2.5 kilometers per hour (1.55 mph) every year.

“We’re talking about such a small change that if we didn’t have 11 years of Hubble data, we wouldn’t know it had happened,” said Simon. “With Hubble, we have the precision we need to spot a trend.”

Hubble’s ongoing monitoring allows researchers to revisit and analyze its data very precisely as they keep adding to it. The smallest features Hubble can reveal in the storm are a mere 170 kilometers (106 miles) across.

To achieve this result, Simon used specialized software to track up to hundreds of thousands of wind vectors every time Hubble photographed Jupiter.

Does this mean that the great red spot is becoming stronger, or is this just a temporary fluctuation?

“That’s hard to diagnose since Hubble can’t see the bottom of the storm very well. Anything below the cloud tops is invisible in the data,” explained Wong. “But it’s an interesting piece of the puzzle that can help us understand what’s fueling the Great Red Spot and how it’s maintaining its energy.”

There’s still a lot of work to do to fully understand it.

This article was originally published on Universe Today by Matthew Cimone. Read the original article here.