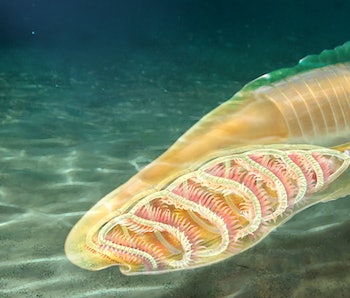 Half a billion years ago, our ancestors grew a spine. The evolution of an internal skeleton marks a milestone in the history of life on Earth. From wriggly, worm-like fishes, ancient animals that could stand on their own two feet arose. Eventually, so did our species, Homo Sapiens.

Scientists know the broad strokes of how vertebrates — creatures with internal skeletal structures and spines, like rats or eagles, rather than external skeletons, like scorpions or starfish — developed. The story goes like this: First, there were spineless fish-worm creatures. Then there were bony fish. And so the great diversity of all vertebrates came to be thereafter.

This story leaves out a lot of detail and nuance. One reason why it is so lacking in detail is that the fossil record is spotty — there are massive gaps at some of the most crucial moments of the evolution of life as we know it. But there are little clues scientists are beginning to decipher thanks to new technology — like the fossils of a fish-like creature called a yunnanozoan.

What’s new — In a new study, scientists took a closer look at a set of yunnanozoan fossils dating back 518 million years. These serpentine creatures are just a few centimeters long, and are strangely similar in appearance to a baby eel or whitebait. Yunnanozoans get their name from Yunnan province in China, which is where their fossils were first discovered in the 1990s.

Since then, paleontologists have argued over where to place the yunnanozoans on life’s evolutionary tree. Now, it turns out, they’re far closer to us than some scientists thought.

In the study, researchers examined 127 newly-collected yunnanozoan fossils and found that the cage-like structure supporting their gills was made of cartilage — a distinct feature of vertebrates. According to the new evidence, yunnanozoans were some of the earliest vertebrates to evolve, representing a crucial transition stage from the floppy forms of old to the rigid skeletons of today.

“It is amazingly preserved,” says study co-author Fangchen Zhao, a paleontologist at Nanjing Institute of Paleontology and Geology in China.

The study is published this week in the journal Science.

Digging into the details — Baoyu Jiang, co-author of the study and paleontologist at Nanjing University in China, tells Inverse that he was shocked to see that yunnanozoans had cartilage skeletal structures supporting their gills.

Cartilage is a firm, white tissue that offers a scaffold within the bodies of all sorts of vertebrates, from human noses and ears to the entire skeletons of sharks. The first internal skeletons in evolutionary history were made of this tissue. Cartilage predates the first bones by about 100 million years.

In the study, the researchers identified seven arches made of cartilage that supported the yunnanozoan’s gills — a massive giveaway that they weren’t just a more-ancient cousin of vertebrates, but some of the earliest members of the vertebrate lineage themselves.

This study provides “amazing evidence” that yunnanozoans were in fact vertebrates, says Jon Mallatt, who studies evolutionary development at Washington State University. He was not involved in the research but served as a peer reviewer prior to the study’s publication.

Why it matters — A fresh, in-depth look at these wormy creatures’ internal anatomy has clued scientists into what ancient animals’ internal skeletons looked like when they first developed — previously, scientists had only been able to theorize about these details, says Christine Hirschberger, who studies evolutionary development at the University of Cambridge and was not involved in the recent study.

Also, there’s a reason why the paleontologists focused so much of their attention on the gill region, or pharynx, of our early ancestors. The arches of cartilage that developed to support the gills would have allowed the creatures to take in more oxygen and live a more active lifestyle, hunting for prey rather than waiting for food to filter into their mouths, says Hirschberger. In turn, these new findings reveal details of yunnanozoans’ likely behaviors.

Eventually, this internal skeleton — made of seven pharyngeal arches — would evolve into the structure of the bodies of tens of thousands of species of vertebrates. Today, this legacy is perhaps most easily visible in the lamprey, a jawless fish whose snake-like body still looks a bit like a yunnanozoan.

But five of the arches are also still visible in the human embryo. Embryos also show gill-like slits — both holdovers from our water-dwelling days.

During human development, the five pharyngeal arches turn into features that support our neck and head.

The new study also confirms that the first gill arch played a unique role in evolution. Over the years, the first arch evolved into the jawbone that now allows us and other vertebrates to open our mouths and chomp on large prey. For years, most scientists thought that this arch always played a different role than the rest of the arches that supported ancient creatures’ gills. But these new findings show that the jawbone started out as a gill arch just like any other.

“This changes our view on the evolution of the first arch quite substantially,” says Hirschberger.

How they did it — The tiny yunnanozoans in this study were found fossilized in yellow mudstone that encased them during the Cambrian Period, when biodiversity exploded across the planet. They were unearthed in the town of Haikou in Kunming, China.

Even though the fossils are a half-billion years old, the researchers were able to resurrect a great deal of detail using advanced imaging techniques.

“The yunnanozoan specimens have great potential value because some of them show among the best fossil-preservation of soft tissues ever encountered, even better than the other organisms in the same fossil beds,” Mallatt says.

Using special microscopy equipment, the researchers found that the arched cartilage rods had a similar structure to bamboo: a hollow cylinder with circular disks spaced out inside of it. This cartilage structure is more “elastic, supportive, and protective” than the non-cartilaginous bars of tissue that underlie the gills of invertebrates, says study author Jiang.

By comparing the anatomy of these yunnanozoan fossils to a variety of other vertebrates, both living and extinct, the researchers were able to place these mysterious creatures at the root of the vertebrate family tree.

What’s next — This newfound understanding of yunnanozoans as vertebrates will help paleontologists learn much more about the origins of back-boned life, says Mallatt.

For his part, Mallat is particularly interested in how the brains and other soft organs of vertebrates developed. Answering those questions will require more fossil finds, however. As technology continues to improve, digging into these little relics of the Earth’s archaic past becomes slightly easier — even as time stretches on.

And there are other mysteries, too.

Yunnanozoans are the earliest vertebrates we have evidence of today. But importantly, they aren’t our first vertebrate ancestor, Mallatt says. Zhao says that his team plans to keep exploring more fossils and filling in the gaps.

Those fossils, if they exist, have yet to be found. They are just one of many holes in our understanding of how vertebrates evolved.