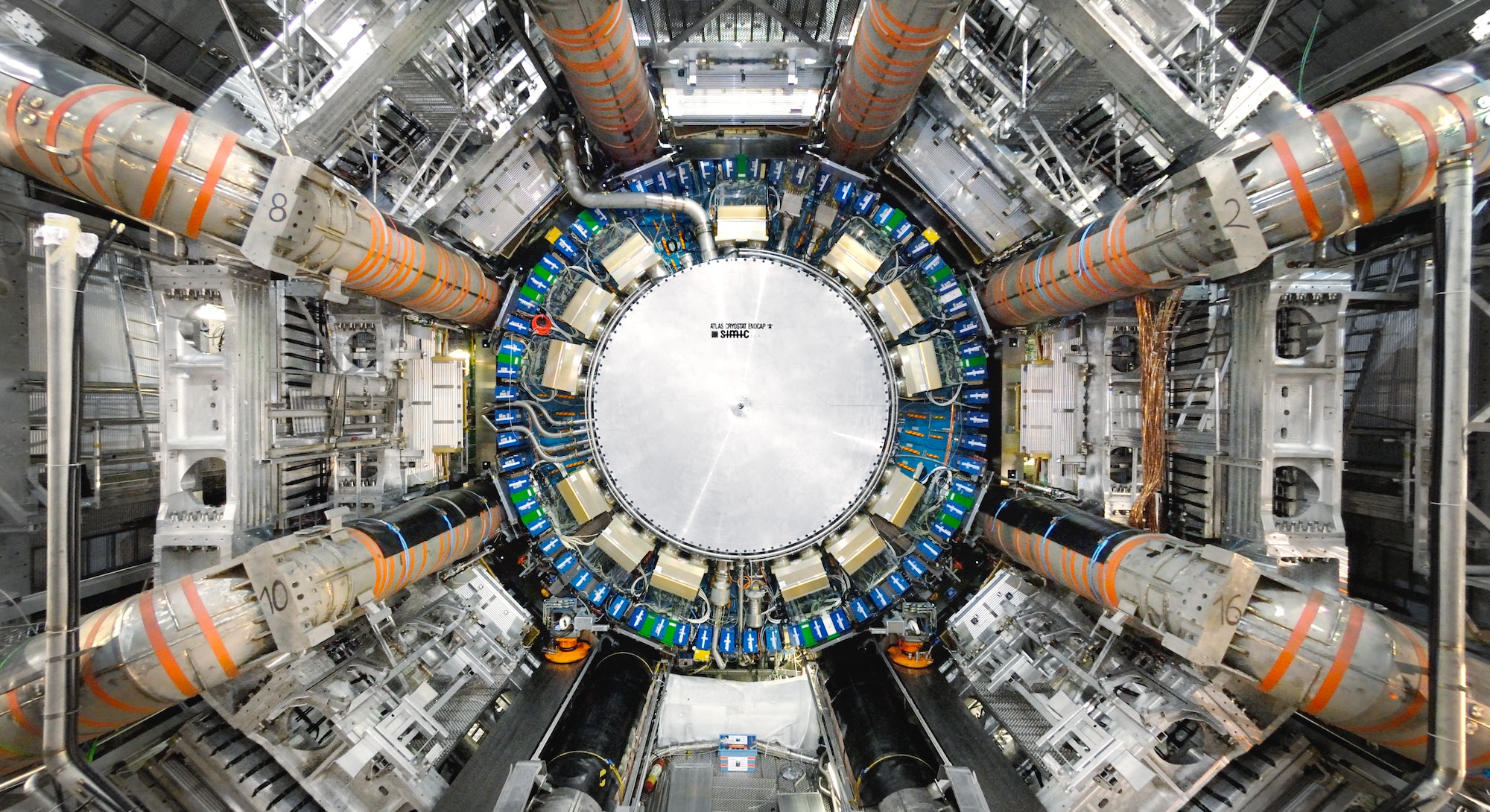 The existence of matter as we know it hinges on a theory. Known as the Standard Model of particle physics, the theory explains how fundamental particles — 17 to be exact — interact with the elementary forces of nature. Formalized in the 1970s, the concept encapsulates our current understanding of what are the building blocks of matter.

By the 1960s, 16 of these particles had been discovered, but there was something missing. Then, in 1964, British physicist Peter Higgs published a paper predicting the existence of a new kind of particle, capable of giving all other particles mass, and allowing for the existence of matter. Around the same time, other physicists around the world described a very similar particle.

The Higgs boson is referred to as the “God particle,” the world’s most wanted particle. If this particle did indeed exist, it would be the last missing piece of the Standard Model puzzle. It had never been observed because no particle accelerator could produce enough data to verify its existence. But almost half a century after it was first proposed, the Easter egg hunt came to a climactic end.

On July 4, 2012, the discovery of a Higgs-like boson was announced by scientists at the Large Hadron Collider. The collider is located at CERN, the European Organization for Nuclear Research.

The Standard Model had finally been completed.

THE DREAM — In December of 1994, construction of the Large Hadron Collider was given the green light. It cost more than $10 billion, making it the most expensive scientific instrument ever built.

The collider is the world’s largest and most powerful particle accelerator, a ring of superconducting magnets stretching 27 kilometers (17 miles). It sits in a 100-meter tunnel — about as long as a football pitch — below the grounds of CERN, which can be found straddling the border between France and Switzerland, near the city of Geneva.

Inside the accelerator, two high-energy particle beams bounce around at close to the speed of light before they are made to smash into each other. They are guided around by the strong magnetic field created by the superconducting magnets, which require chilling to ‑271.3°C, colder than outer space. The beams are made to collide at four locations around the accelerator ring, corresponding to the positions of four particle detectors – ATLAS, CMS, ALICE, and LHCb.

It did not get off to a flying start. Originally scheduled to power up around 2005, the collider wasn’t turned on until September, 2008. Then, just over a week after first coming online, an electrical failure damaged some of the magnets, causing the operation to grind to a halt for a further year and a half.

“The sun never sets on the ATLAS empire because there's always someone somewhere in the world that's awake.”

But once it was up and running, the search began for what Michael Tuts describes as the “crown jewel” — the Higgs boson. Tuts, a professor of physics at Columbia University, is a member of the ATLAS experiment team and manages the physicists from U.S. institutions assigned to the research project.

Even if physicists hadn’t discovered the particle, the outcome of all their work would have been a boon for the field — a no-lose situation, Tuts says.

“Even if you didn't find it, that would have been perhaps even more interesting,” Tuts tells Inverse. Because it would unleash a cornucopia of new possible theories ready to be explored.

THE TEAM — Two teams at CERN — the ATLAS, and the CMS experiments — work in tandem and in rivalry; like siblings, they both compliment each other and compete with each other.

Both teams are made up of an army of about 3,000 physicists a piece, harking from dozens of different countries.

HOW THEY STAY CONNECTED — The researchers hail from more than 60 countries. This wide distribution had its advantages and disadvantages.

Involving people from different parts of the world also “creates a kind of synergy that is quite powerful,” he says. “It lets you look at things from the other point of view and bring something new to the analysis.”

To keep connected and on track, the researchers held collaboration meetings at CERN several times a year. They also kept each other up to date using email, phone calls, and lots of video conferencing. But Tuts maintains nothing can beat the classic water-cooler conversation.

WHY COLLABORATING WAS SO IMPORTANT TO THE MISSION — Particle physics has had a collaborative spirit from its very beginnings. The reason why is fundamental, Tuts explains. It is "purely driven by the fact that the facilities that we need are not ones that you can build at your local university and have the accelerator in your backyard,” he says. “So, I think it's kind of in the DNA of particle physicists to work within large international collaborations.”

What keeps researchers all working together harmoniously, despite all the ups and downs, is the science. Physicists can be “a little bit prima donna,” he jokes, “but in the end it works, because we all ultimately have a common goal and want to work together to achieve that goal.”

“Without this collaboration, [the Higgs] would not have been discovered.”

“You have people working with each other that might be from different cultures, different religions, different points of view. But somehow they all managed to get together and focus on the one thing that they want to do: the science.”

Having two different teams working towards the same goal also led to some healthy competition, Tuts says. “If two experiments see the same phenomenon, then you have much greater confidence that what you're seeing is actually real.”

The community fostered at CERN has been a subject of study for anthropologists and sociologists. The fact so many physicists manage to work and collaborate together within the same enterprise is incredible.

SO, DID THEY ACHIEVE IT? On July 4, 2012, the ATLAS and CMS experiments announced they had each observed a new particle with a mass of about 125 gigaelectron volts (GeV) — it appeared to be the Higgs boson, at last.

Speaking at CERN, Higgs himself described the discovery as “an incredible thing that happened in my lifetime.” He could be seen wiping away tears as the announcement was made. The CERN auditorium was locked for three days to stop people from camping out in it.

Tuts was in New York when the news dropped. The announcement was made at CERN at 9 a.m. Swiss time – 3 a.m. Eastern. Regardless, he decided to organize a party to celebrate and reached out to those involved who were in the city. “And I got two answers. One was, “3 a.m. on the Fourth of July — are you nuts?” The other was, “Hey, good idea.”

About a hundred people, from grandparents to children, all came together to rejoice. He describes celebrating the historic milestone as an “emotional time.”

The following year, on October 8, 2013, Higgs accepted the Nobel prize in physics, which he shared with Belgian physicist François Englert for their combined work on the theory of the Higgs boson.

WHAT’S NEXT — Finding the Higgs boson is an incredible feat, but it is by no means the end of the story. There’s still a lot of work to do that will keep physicists occupied for a long time. Rather than closing the book on the Standard Model, the discovery of the Higgs opened paths toward new physics.

One of the big questions scientists want to answer now is whether the particle they found is indeed the Higgs boson as predicted by the Standard Model, or something different and more complex.

But nevertheless, the landmark achievement of finding this particle was undeniably the fruit of collective graft and hard work.

“The bottom line," Tuts says, "Is that without this collaboration, it would not have been discovered.”