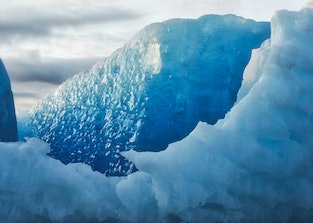 Centimeters the seas will rise at least due to ice melt

Recent climate research published in Nature Climate Change has confirmed that melting icecaps in Greenland will contribute to a minimum of 27 centimeters rise in ocean levels even if we collectively stop burning fossil fuels immediately.

We have reached a “point of no return.” And what makes it worse is that this is the most conservative estimate, as it only factors in the contribution made by the ice shelf in Greenland. Projections have also confirmed that overall planetary warming has exceeded the original estimates for global heating and that we are in for a difficult millennium if drastic action isn’t taken immediately.

The relationship between planetary and climate science is extremely important, and the two disciplines frequently intersect. When, for example, it was discovered that there had been water on mars, planetary scientists were able to identify features and rock formations that could only have come from contact with water. Similarly, the expansion of orbital science and communications satellites has helped weather and planetary scientists get a better understanding of large-scale changes on the earth’s surface, including major changes in our oceans. Such a massive amount of data was never possible to collect before, even with multi-generational observations, when changes were observed on the Earth’s surface through measurements and photography over many decades.

Although historical research has been based on computer models that take data to create likely models for the future, the inclusion of satellite data in this more recent study has shown a much grimmer prognosis than was previously projected. The satellite data measured ice loss in Greenland between the years 2000 and 2019 and provided more accurate measurements than were previously available. The results have allowed scientists to measure actual melting of the ice shelf, accounting for factors like snowfall. And although it’s hard to fathom the long-term effects of rising sea levels when you live inland, an estimated 600 million people are living in coastal regions, defined as anywhere less than 10 meters above sea level, and they will all be at risk soon.

Jason Box from the National Geological Survey of Denmark and Greenland (GEUS), who led the research, has confirmed that these current, devastating estimates are still the “rock-bottom minimum.” He projects that, even conservatively, we will see these numbers more than double in the next century. The reason for this is that the research has only accounted for global heating. But there are many other ways that ice sheets can melt at their margins in other regions, which are due to a range of different factors. So, although this new study has provided a more concrete way to estimate the future loss of ice (and the resulting rise in sea levels) it does not provide a definite timeline.

In terms of climate change, and global warming, the term “tipping point” has often been used as a phrase to identify the “point of no return.” This is the point at which the crises may become exponential and unstoppable, no matter what we do. And sadly, this study has confirmed that we are firmly at that point, as stated by William Colgan of GEUS:

“Whether it’s coming in 100 years or 150 years, it’s coming. And the sea-level rise we are committed to is growing at present because of the climate trajectory we’re on.”

“The difference between 78 cm and 27 cm highlights the difference that can be made through implementing the Paris agreement. There is still a lot of room to minimize the damage.”

What needs to happen next

As glaciers and ice sheets in mountainous areas, including the Antarctic across the globe, begin to show a significant loss, fast and decisive policy changes may at least mitigate catastrophic future climate-related events.

As support grows within the scientific community, activists are helping to spread the word, because the real change will come from hard-line political and legislative action. In the words of Gail Whiteman at the University of Exeter, “The results of this new study are hard to ignore for all business leaders and politicians concerned about the future of humanity. It is bad news for the nearly 600 million people that live in coastal zones [less than 10m above sea level] worldwide. As sea levels rise, they will be increasingly vulnerable, and it threatens approximately $1 trillion of global wealth.”

Southern Hemisphere farmers will tell you in their dry, grassy summers that “Fire is an everybody problem.” It’s fair at this point to say that global warming is also an “everybody problem.” It is no longer a question of “if” but much more “when” and how we can mitigate the coming changes that await us all.

This article was originally published on Universe Today by Cathrine Versfeld. Read the original article here.

More like this
Science
Dec. 3, 2022
The wreckage of ancient hurricanes could predict future storms
By Tyler Winkler and The Conversation
Science
November 26, 2022
Are you ready for extreme snow?
By The Conversation and Michael A. Rawlins
Science
November 27, 2022
Can I feed my pet only dry food? Why the answer is different for cats and dogs
By Tara Yarlagadda
Related Tags
Share: