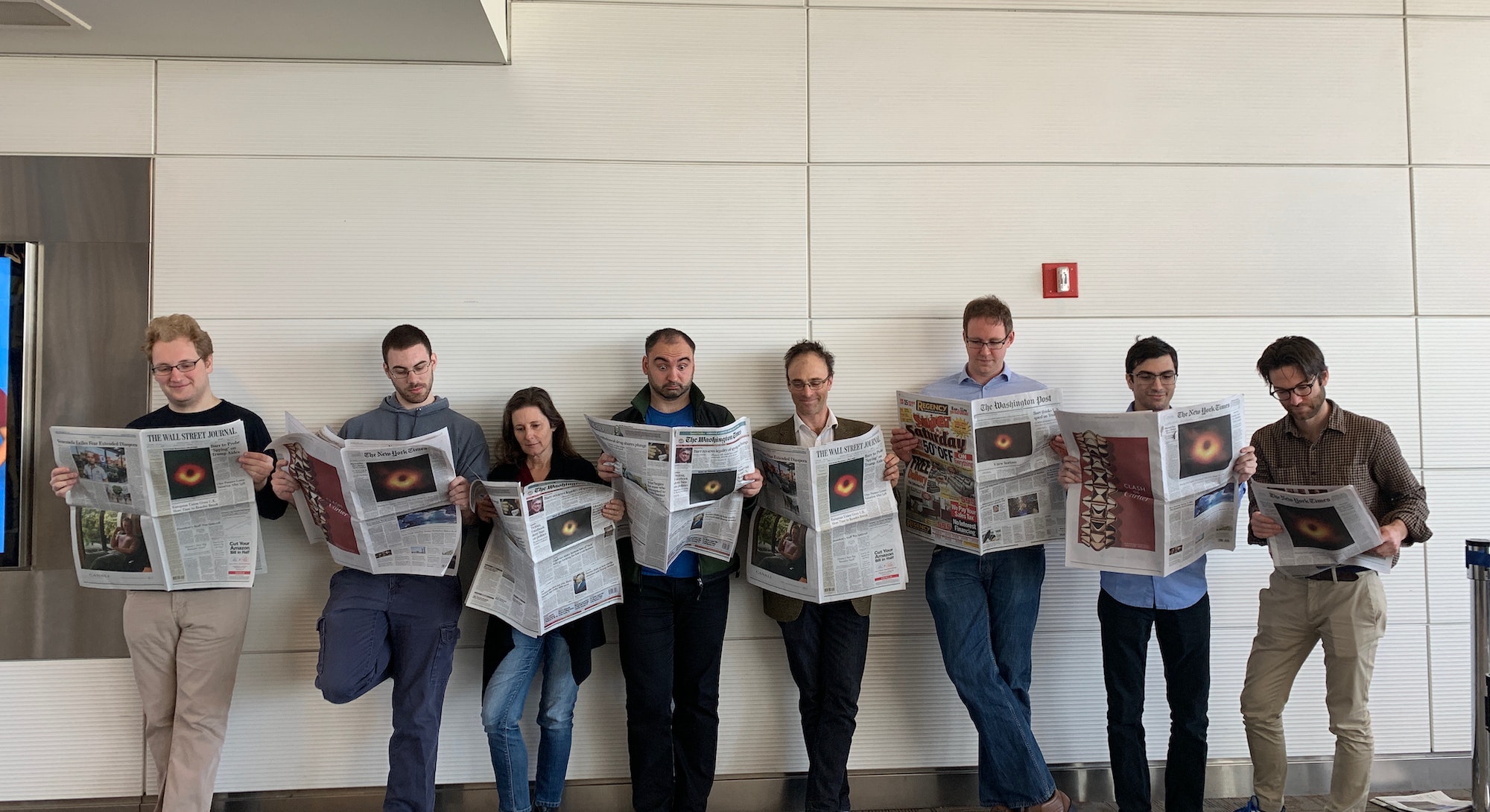 The concept of a black hole is one that has eluded scientists for centuries. They were almost certain black holes were out there, but proving it? That was a whole other story.

Einstein first predicted black holes in his theory of general relativity, published more than a hundred years ago. Even Einstein was skeptical about their existence. But it turns out that Einstein was right, once again.

A black hole has escaped capture for so long because they are so small, so distant, and – most crucially – so black. “To see something as small as a black hole, it would be akin to seeing an orange on the Moon,” Sheperd Doeleman, the founding director of the Event Horizon Telescope and a senior research fellow at Harvard University, tells Inverse. “And so you can't do this with a single telescope; you have to do it by constructing a virtual telescope as large as the Earth.” And so they did.

In 2017, the Event Horizon Telescope – a network of linked telescopes distributed all over the world – took observations that would later form the first-ever image of a blackhole. The final image, released in 2019, was of the supermassive black hole found at the centre of Messier 87 (or M87), a galaxy in the nearby Virgo galaxy cluster – 55 million light-years from Earth with a mass 6.5 billion times that of the Sun.

The team was hell-bent on putting Einstein’s theory to the test. “And it's hard to imagine a better place to do that than the edge of a supermassive black hole,” Doeleman says.

THE DREAM — In 2009, Doeleman and some colleagues published a paper declaring that, before the decade was out, they were going to come up with an image of a blackhole.

In the beginning, it was just a small group of them dedicated to the proof of concept. Throughout the 2000s, they put all their energy into trying to prove that it could be done – with many setbacks.

“You need vision to launch things, but you also need collaboration to do grand things.”

“In 2006, we failed miserably,” admits Doeleman. They had spent many months pairing a telescope in Arizona with another in Hawaii. It was only after they had returned and looked at the data they had collected that they realized something had been wrong in the setup in one of the telescopes and it hadn’t worked. “It was crushing. It was just the most devastating thing ever, because this whole team, maybe like 20 or 25 of us, had put so much of our heart and soul into it that it took a lot for us to get up off the ground.”

And, thankfully, they did.

THE TEAM — The Event Horizon Telescope, named after the point of no return in a black hole, was launched in 2009, made up of telescopes positioned high and low across the globe, from volcanoes in Hawaii to the desert in Chile to the icy South Pole.

The collaboration comprised more than 200 researchers harking from over 40 countries.

HOW THEY STAYED CONNECTED — To keep in contact with everyone on the project, “we used everything; nothing was off limits,” Doeleman says. But definitely “a lot of email.” What proved most helpful was splitting off into smaller groups to focus on a specific task, like data analysis, instrumentation, or imaging. Doeleman’s role was to make sure each group was collaborating and working together.

WHY COLLABORATING WAS SO IMPORTANT TO THE MISSION — Despite the difficulties of organizing such a large team distributed at different ends of the Earth, it worked because everyone had the same vision, Doeleman says. “Keeping that together was probably one of the highlights of my career, you know, organizing this and getting it all moving in one direction. I call it herding cats. But it was really, truly, hugely fulfilling.”

One thing that was crucial was bringing on talented early-career astronomers, according to Doeleman. “Having a lot of young people involved in the project, who had tremendous energy and who had a lot of expertise, in some cases from new and disparate fields, created very fertile soil.”

He makes clear there’s no way they could've pulled it off if the project hadn’t been such a collective effort. “You need vision to launch things,” he says. “But you also need collaboration to do grand things.”

And the Event Horizon Telescope collaboration had bountiful supplies of the two. “That’s the key here – you need both.”

SO, DID THEY ACHIEVE IT? In 2017, they took the most advanced telescopes around the planet – eight radio observatories in six geographical locations around the globe – and stitched them together for 10 days. “And together, they did something that no one of those telescopes could do on their own. They formed this immense telescope with unrivaled resolving power,” says Doeleman. The telescopes worked by taking observations using a technique called very long baseline interferometry.

The data that was collected was far too large to send over the Internet, so the hard disks had to be flown to the respective places for analysis.

The team went back to Harvard University, where they had a week-long workshop to go through all of the images. To make sure that they weren’t just seeing what they wanted to see, they split up into four different teams, and no team was allowed to speak to the others. “To a child with a hammer, everything looks like a nail; to a group of astronomers with an Earth-sized virtual telescope, everything looks like a black hole shadow,” says Doeleman.

Doeleman recalls a moment, towards the beginning of the analysis period, when he was at a conference dinner, and a few graduate students and postdocs hurried over and showed him a graph with a pattern that was “just unmistakable,” he says. “And it just knocked my socks off.” He rushed off from the dinner back to his office, where he did some quick modeling and realized what he was really looking at: it was the edge of a blackhole.

In late July 2018, they unveiled all four of the images made by the different teams. And each of them showed this ring structure – it was the black hole they had been so desperately working to capture.

“And it's just hard to express the wonder, the awe, the humility, and the camaraderie that comes with a moment like that,” he says. They set up a conference call with the other people who had worked on the project in other parts of the world “to give everyone that same feeling”.

They celebrated their achievement with beer, champagne. “I think there was even a karaoke night,” he laughs.

There was also a huge sense of relief. “You push on something for so long, and you wonder if it’s ever going to give. And so many things had to go right; this was truly like the Rube Goldberg of all projects,” he says.

From when they initially took the observations, it took two years to finally present the findings simply due to the arduous process of analyzing so many observations.

Doeleman says he’ll never forget when they revealed their achievement at a press conference in Washington, DC, on April 10, 2019. When they unveiled the image, they received a standing ovation from the entire room.

France Córdova, the director of the National Science Foundation at the time, said that the image had brought tears to her eyes. “We have been studying black holes for so long that sometimes it’s easy to forget that none of us has seen one,” she said. “This will leave an imprint on people’s memories.”

WHAT’S NEXT — The fact that they were able to do it has given Doeleman great confidence that people can achieve extraordinary things. “This wasn’t just a bunch of people in lab coats sharpening their pencils and writing on clipboards. This was a team of passionate people who risked everything and came up with the goods.”

“So, in addition to it being a breakthrough science result, it also makes me very bullish on humanity,” he says.

Capturing such an iconic and historic snapshot doesn’t mean they’re just resting on their laurels. By the end of the next decade, they want to make a movie of a black hole. “So instead of just looking at the bending of light, to test Einstein, we’ll now be able to look at the motion of matter.”