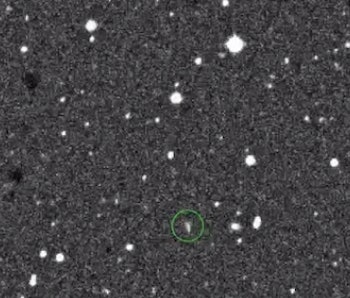 A new discovery suggests we are a little less alone in the cosmos than we might think.

Astronomers at the Catalina Sky Survey in Tucson, Arizona took to Twitter February 25, 2020 to announce a new neighbor has taken up residence in Earth's sphere of influence — a small asteroid that appears, at least for now, to have become a new moon.

The potential new mini-moon has been dubbed 2020 CD3. It has been on NASA's radar for the last month, after it was observed on February 15, 2020. Since then, the object has been observed 52 times, enabling astronomers to conclude that it has indeed been temporarily captured by Earth's gravitational field.

The object was confirmed as a temporarily captured object by The International Astronomical Union's Minor Planet Center in a circular published late February 25, 2020.

Observations of 2020 CD3 "indicate that this object is temporarily bound to Earth," the circular says. "Further observations and dynamical studies are strongly encouraged."

Amazingly, the object has been orbiting our planet in secret for three years, the astronomers estimate.

According to Kacper Wierzchos, one of the astronomers to discover the object, 2020 CD3 is pretty small — measuring between 1.9 and 3.5 meters across. The asteroid is identified as a c-type asteroid, which means it contains a large amount of carbon. This is one of the most common kinds of asteroids observed, according to NASA.

Earth has gained and lost mini-moons like 2020 CD3 before. In fact, NASA estimates that, at any given moment, we have at least one other object of 1 meter in diameter or more orbiting our planet aside from our own Moon.